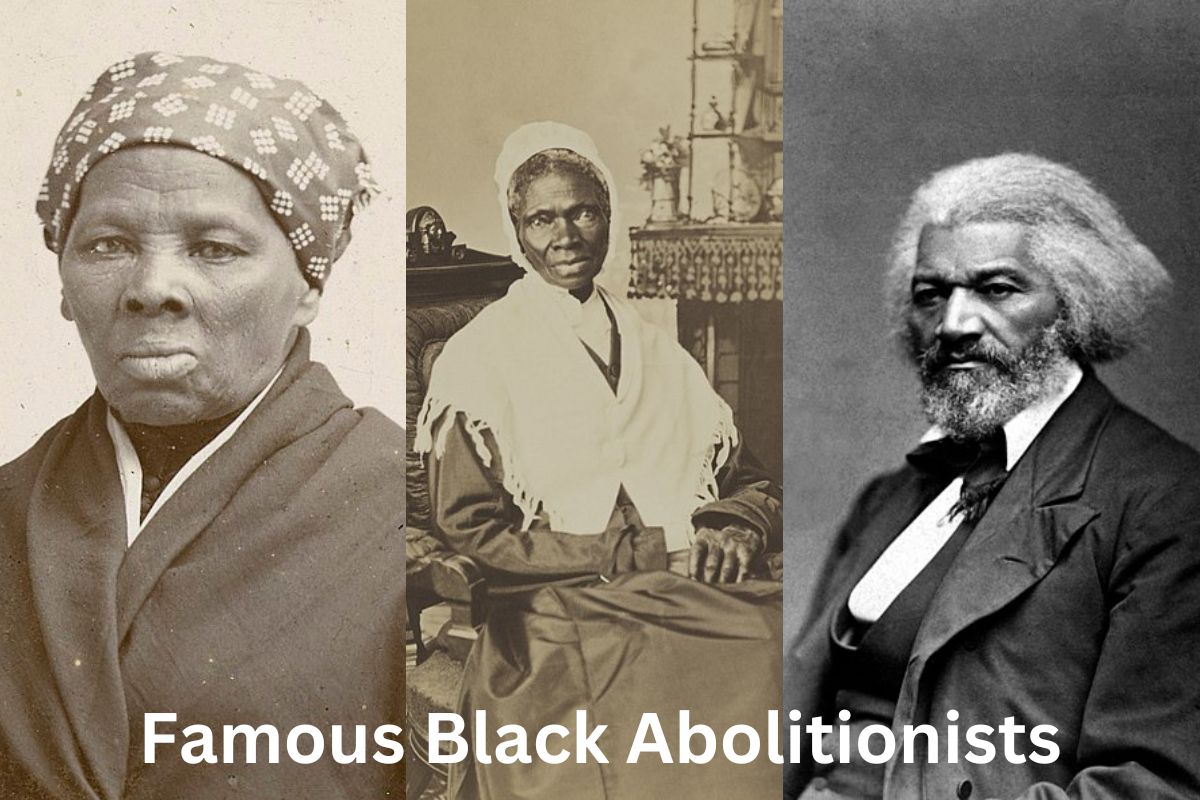 African-Americans known as “black abolitionists” fought for slavery’s abolition in the United States.

Most of the black abolitionists were liberated slaves who were committed to assisting their fellow slaves achieve freedom.

Others were free African-Americans who fought to end slavery and advance civil rights for their fellow citizens.

Black abolitionists were instrumental in the fight to end slavery and the abolitionist movement. To bring attention to the misery of slaves and the need for abolition, they lectured, authored essays and books, and organized rallies and boycotts.

Furthermore, they collaborated with white abolitionists and anti-slavery groups to spread awareness about their cause.

In the fight for African American freedom and equality, these and other black abolitionists put their lives on the line.

Tubman, who was born into slavery, used the anti-slavery organization and its network of safe houses (the Underground Railroad) to save the lives of nearly seventy slaves, including many of her own relatives and friends.

During the American Civil War, she was a Union Army armed scout and spy. Later in her life, Tubman worked to win the vote for women.

During the Civil War, Tubman served in numerous capacities for the Union Army, including as a cook, nurse, scout, and spy. When she led an assault on Combahee Ferry and freed over 700 slaves, she made history as the first woman to lead an armed expedition during a war.

She returned to Auburn, New York to care for her aged parents after purchasing a home there in 1859.

Before she became ill, she battled for women’s suffrage and aided in the construction of a home for elderly African Americans. As a result, she came to symbolize independence and disobedience.

Frederick Douglass was a former slave who rose to fame in the United States as an abolitionist and fighter for African-American rights. Born into slavery in Maryland in 1818, he escaped to freedom in the North in 1838.

After escaping slavery, Douglass grew to popularity as a speaker and writer, using his personal experiences as a slave to educate others about the reality of slavery and the need for its abolition.

The autobiography “Narrative of the Life of Frederick Douglass, an American Slave” recounts his life as a slave and his escape to freedom.

Douglass was also a publisher and editor, and he leveraged both roles to advocate for African American rights and criticize slavery and segregation.

In addition to his efforts as an abolitionist, Douglass participated in the campaigns for women’s suffrage and civil rights. He passed away in 1895, but his prominence in the antislavery and civil rights campaigns endures to this day.

African-American feminist and abolitionist Sojourner Truth. A slave since birth, she and her small daughter made their way to freedom in 1826.

After gaining her independence, Truth became a well-known activist and public speaker who toured the northeastern United States, speaking out against slavery and in favor of women’s and African-Americans’ rights.

Truth made headlines in 1851 when she spoke at a women’s rights convention in Ohio with the address “Ain’t I a Woman?” She stated in her speech that women’s rights and black rights were the same issue, despite the fact that women of color experienced unique forms of oppression.

The abolitionist and women’s rights groups of the time were impacted by Truth’s acts and words. Till her death in 1883, she fought for equality in society.

Elizabeth Freeman, also known as Bet, Mum Bett, and MumBet, was the first enslaved African-American to file for and obtain freedom in a freedom suit in the state of Massachusetts. She was born around 1744 and died on December 28, 1829.

The Massachusetts Supreme Judicial Court, in its decision that favored Freeman, found that slavery was irreconcilable with the Massachusetts State Constitution of 1780, which had been adopted in 1780.

Brom and Bett v. Ashley (1781), which took place in Massachusetts, was referenced by the Supreme Judicial Court of Massachusetts when it was considering Quock Walker’s freedom case on appeal.

The decision of the court to affirm Walker’s freedom in conformity with the constitution of the state was interpreted as an implicit abolition of slavery in the Commonwealth of Massachusetts.

Beginning in the year 1845, she was one of the first women of African-American descent to be published in the United States of America.

Harper, who began her career when she was 20 years old and was born without parental supervision in Baltimore, Maryland, went on to enjoy a lengthy and fruitful professional life. She was one of the first Black women to write a novel, and she did so at the age of 67 with the novel Iola Leroy (1892). The story was very well received by critics.

At the age of 24, she was the only female instructor at Union Seminary, which was an institution linked with the AME Church and was located in Columbus, Ohio.

In 1851, while staying with the family of William Still, a clerk at the Pennsylvania Abolition Society who supported escaped slaves along the Underground Railroad, Harper started publishing anti-slavery literature. At the time, Harper was staying with the Still family.

After becoming a member of the American Anti-Slavery Society in 1853, Harper began his career as a public speaker and activist.

William Wells Brown was a prominent figure in the abolitionist, historical, and literary communities in African American history. In the year 1814, he was born into slavery in the state of Kentucky, and in the year 1834, he made his way to the free state of Ohio.

After he had gotten away from the slave masters, he became involved in the abolitionist movement by giving lectures and working as a recruiter for the anti-slavery cause.

Brown was a well-known abolitionist, but he was also a prolific author in addition to these roles. He penned a number of books, one of which being “Clotel; or, The President’s Daughter,” which is considered the first novel to be published by an African American author.

This book is a dramatized portrayal of the relationship between Thomas Jefferson and his slave Sally Hemings. In addition, he penned his autobiography, which was titled “Narrative of William W. Brown, a Fugitive Slave” and was first distributed in the year 1847.

Brown continued his involvement in the civil rights movement after the end of the Civil War, during which time he worked to improve the educational and professional opportunities available to African Americans. He passed away in the year 1884, when he was 70 years old.

Ellen disguised herself as a white male planter and William pretended to be her servant to make their daring escape. Abolitionists in Philadelphia helped the couple get to safety after they took a train and steamboat there.

The Crafts family, freed from slavery, joined the fight to end it. They spoke publicly about their time in slavery and their subsequent emancipation in order to highlight the wrongs of slavery.

In time, the pair made England their permanent residence, where they kept up their abolitionist activism. A book titled “Running a Thousand Miles for Freedom” by Ellen Craft was released in 1861.

After the Civil War, the Crafts relocated to Boston, Massachusetts, where they continued their efforts to improve black citizens’ access to higher education and employment.

David Walker was a prominent figure in the abolitionist and activist community of African Americans. In the year 1785, he was born in Wilmington, North Carolina, the son of a white father and an enslaved woman. His mother was born into slavery.

Walker authored “An Appeal to the Colored Citizens of the World” in 1829, which was a strong antislavery tract that called for people who were slaves to reject their oppression and demand that they be freed.

The tract was given out to a large number of people and ended up having a substantial influence on the abolitionist cause.

As a consequence of Walker’s advocacy and the publication of “An Appeal,” white supremacists made him a target, and he was subjected to threats and acts of violence as a direct result of his work. He only lived to be 35 years old when he passed away in 1830, possibly as a result of poisoning.

His views and activities, on the other hand, continued to have an impact on the abolitionist movement as well as the struggle for civil rights in the United States.

Henry Highland Garnet was abolitionist, pastor, and political leader of African descent. He was born into slavery in Maryland in 1815, but as a child escaped to freedom in the North. Garnet went on to become an ordained priest and a notable abolitionist leader.

Garnet was a skilled speaker and a powerful campaigner for African American rights. He delivered an impassioned speech to the National Negro Convention in Buffalo, New York, in 1843, in which he urged enslaved people to rise up and fight for their liberation. Garnet’s speech, known as the “Call to Rebellion,” was divisive and was met with skepticism by many white abolitionists, but it inspired and galvanized the abolitionist cause.

Garnet was active in the struggle for black education and economic opportunity in addition to his efforts as an abolitionist. He was the founding president of the African Civilization Society, a non-profit organization dedicated to the education and uplift of African Americans, and he helped to found the African Methodist Episcopal Zion Church, a black-inclusive denomination. Garnet died at the age of 67 in 1882.

Solomon Northup was an African American man who was born free in New York in the early 1800s. His name is associated with the abolitionist movement. In the year 1841, he was taken against his will and sold into slavery in the southern states.

After being held captive for a period of twelve years, he was eventually liberated and brought back to his family in the North.

In his autobiography titled “Twelve Years a Slave,” which was first published in 1853, Northup provided a thorough account of his time spent working as a slave.

The book presented a vivid and horrific portrayal of the brutalities and injustices of slavery, as well as Northup’s own battle to maintain his dignity and humanity despite the challenging and often terrible conditions that he was forced to endure.

Northup became an abolitionist and fought to raise awareness about the injustices of slavery once he was rescued and returned to the North. He utilized his story to help generate support for the abolitionist movement by giving lectures, writing articles, and publishing books about his experiences. Northup passed away in the year 1863, when he was 63 years old.

Since its publication, his autobiography, “Twelve Years a Slave,” has established itself as a significant piece of historical literature regarding the institution of slavery in the United States.