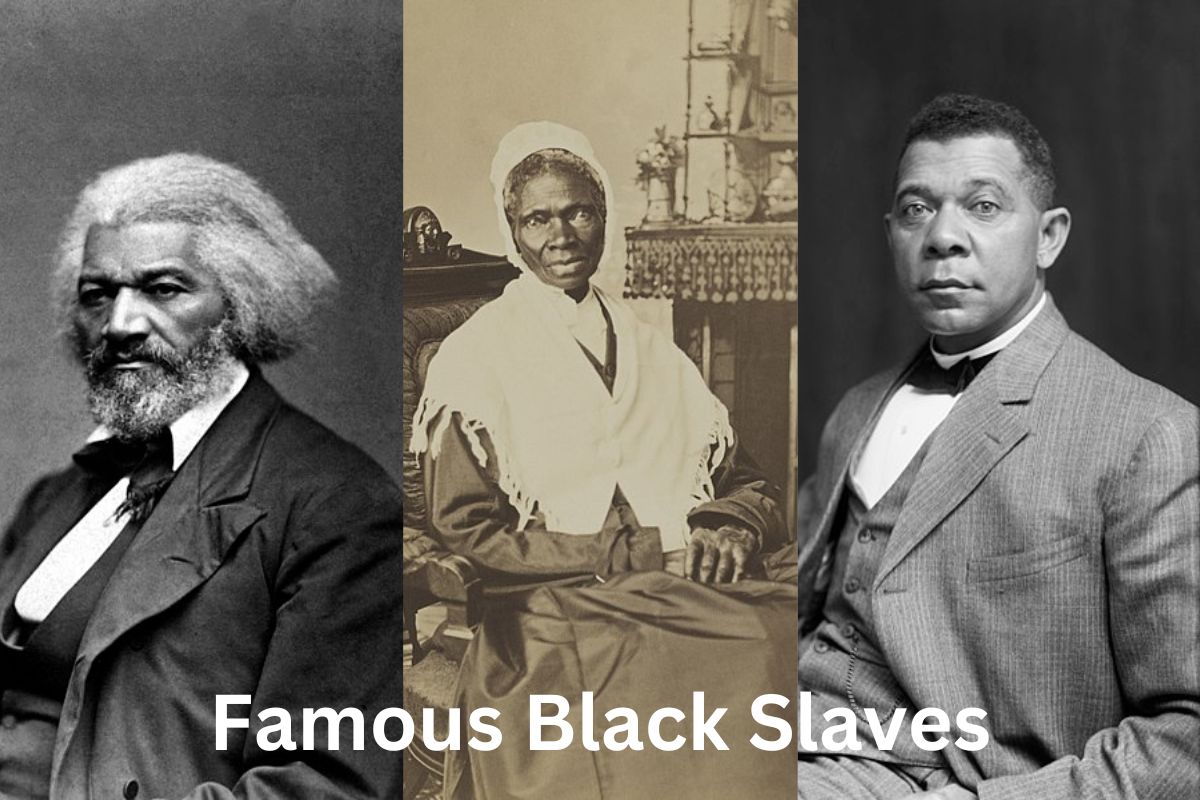 Black slaves were those who were bound in bonds of servitude and forced to labor for others without compensation. They had no rights because they were property.

From the 16th to the 19th century, the transatlantic slave trade took millions of Africans into slavery in the Americas. They were mostly transported to the South to work on plantations, where they endured terrible conditions and cruel slave owners.

Many people of African descent who were held as slaves found ways to fight back against their oppressors and win their freedom, whether by small, individual acts of defiance or large, coordinated uprisings.

It took a long time and a lot of effort, but in 1865, the United States finally abolished slavery with the ratification of the 13th Amendment to the Constitution.

A former slave, Frederick Douglass became a prominent abolitionist and advocate for black liberation in the United States. After being born into slavery in Maryland in 1818, he made his way to the North in search of freedom by 1838.

After he was able to escape slavery, Douglass became a well-known speaker and writer who discussed the evils of the slave system and advocated for its abolition.

Aside from his activism, Douglass worked as a publisher and editor, where he criticized slavery and segregation and promoted the rights of African Americans.

Douglass was active in the fights for both women’s suffrage and civil rights in addition to his abolitionist endeavors. Even though he went away in 1895, his legacy in the fights against slavery and for civil rights remains strong.

Sojourner Truth was an African-American woman who was an abolitionist and a feminist. She had been a slave from the time she was born, but in 1826, she and her little daughter managed to escape.

After attaining her freedom, Truth went on to become a prominent activist and public speaker. She traveled throughout the northeastern region of the United States, where she gave speeches opposing slavery and advocating for the rights of African-Americans and women.

When Sojourner Truth gave the lecture “Ain’t I a Woman?” in 1851 at a convention for the advancement of women’s rights in Ohio, she became a national celebrity. In spite of the reality that women of color have been subjected to a variety of types of oppression, she claimed in her address that the issue of women’s rights and the issue of black rights were the same.

Truth’s actions and words had an effect on the abolitionist movement as well as the women’s rights movement of the period. She worked for equality in society up until the year 1883, the year she passed away.

Harriet Tubman was born into slavery in the early 1820s in Dorchester County, Maryland. She was one of Ben Ross and Harriet Green’s eleven children. Tubman was physically abused as a kid by slave owners and overseers.

Despite these obstacles, Tubman was resolved to free herself from slavery and help others do the same. She fled to Philadelphia, Pennsylvania, in 1849, and joined the Underground Railroad, a network of antislavery activists and safe houses that assisted enslaved individuals in escaping to freedom.

Tubman went on 13 missions to free almost 70 enslaved individuals, including relatives and friends. She was dubbed the “Moses of her people” because of her bravery and leadership in bringing enslaved people to liberation.

Tubman also assisted abolitionist John Brown in recruiting men for his 1859 raid on Harpers Ferry, Virginia. During the Civil War, she worked with the Union Army as an armed scout and spy, collaborating with Colonel James Montgomery and the 2nd South Carolina Volunteers, a group of former enslaved people.

Following the Civil War, Tubman relocated to Auburn, New York, where she assisted in the care of her aging parents and other family members. She also cooked, cleaned, and did laundry for local neighbors in order to support herself and those under her care.

Tubman became involved in the fight to obtain pensions for freed slaves and their family in her senior years. She passed away in 1913, at the age of 93.

Booker T. Washington was a prominent African American educator, novelist, and activist in his time. In the middle of the nineteenth century, he was born into slavery, and in the years following the Civil War, he rose to fame as a champion for the rights of African Americans.

Washington was the founder of the historically black Tuskegee University in Alabama and also served as the institution’s first president. Additionally, he worked for the goal of racial equality in the United States and was influential in the development of educational opportunities in the field of trade for African Americans.

At the time, Washington’s viewpoint on race relations was controversial because he believed that African Americans should place a higher emphasis on their economic and educational advancement than on their political rights.

This tactic, which is known as “accommodationism,” was met with opposition from a large number of African Americans who held the belief that the full rights and equality that were granted by the Constitution ought to be claimed.

In spite of this controversy, Washington was widely recognized as a leader, and the legacy of his efforts to improve the lives of African Americans remains indelible.

In 1822, enslaved African-American man Denmark Vesey planned a slave uprising in Charleston, South Carolina. Vesey, a prominent member of the African Methodist Episcopal Church in Charleston, had bought his freedom in 1799.

He decided that the time had come for a slave rebellion and set about gathering together a group of African Americans, both enslaved and free.

Vesey and a number of his conspirators were apprehended and tried for treason after their conspiracy was discovered and foiled. Five others, including Vesey, were also found guilty and given death sentences; hundreds more were imprisoned or deported.

Vesey’s rebellion was one of the largest and best-planned slave revolts in American history, although it ultimately failed. It shook the entire South and served as a constant reminder of the possibility of a slave uprising.

It’s fair to say that opinions on Vesey’s legacy are as varied as the people who remember him: some honor him as a hero who fought for freedom, while others fear him as a dangerous extremist.

Sam Sharpe, sometimes spelled Sam Sharp and Sam Sharpe Williams, was an enslaved African man who played a crucial role in the Baptist War of 1831, which was a slave uprising in Jamaica. Sam Sharpe was also known as Sam Sharp.

Sharpe was a leading figure in the slave uprising, which was prompted by a number of grievances against the slave system, including the brutal treatment of slaves as well as a lack of freedom and rights for slaves. The uprising was led by Sharpe.

Despite the fact that the uprising was eventually failed, it had a significant influence on abolitionist movements both in Jamaica and elsewhere. Sharpe, along with a large number of other rebel leaders, was put to death; as a result, many Jamaicans see him as a national hero and a symbol of the fight against slavery.

After the revolt, Sharpe’s name became inextricably linked to the struggle for independence and respect for human rights in Jamaica. It is well known that he was a leader in the struggle to abolish slavery and that he fought for justice and equality.

James Somerset, often spelled James Sommersett or James Somersett, was an African man taken as a slave from West Africa to the British colony of Virginia in the early 18th century. Somerset was sold to another Charles Stewart when his original owner, Charles Steuart, transported him to London in 1771.

A case known as the “Somerset case” was brought before the Court of King’s Bench in 1772, where Somerset fought hard for his freedom. Somerset maintained that he was not a slave because he had been brought from Africa to Virginia illegally.

The judge, Lord Chief Justice William Murray, sided with Somerset, saying, “Slavery is of such a nature that it cannot be introduced for moral or political reasons, but only by positive law, which retains its force long after the reasons, occasions, objects, and time itself from which it was created have been erased from memory.” Nothing short of affirmative legislation can be accepted to maintain it; it’s that terrible.

As a result of the Somerset case, the abolitionist movement in England was able to successfully argue that slavery was illegal throughout the country. It was also influential on the American abolitionist movement since it was used as a legal basis for subsequent cases challenging slavery in the courts.

William Harvey Carney was a soldier of African American descent who served in the United States Army. He was one of the first people to be awarded the Medal of Honor, the nation’s highest military decoration.

Carney was born into slavery in the year 1840 in the city of Norfolk, Virginia. He was eventually emancipated as a result of the Emancipation Proclamation in the year 1863. During the time of the Civil War, he joined the Union Army and was assigned to the 54th Massachusetts Volunteer Infantry, which was a regiment comprised of African American service members.

Carney distinguished himself on the 18th of July, 1863, during the assault on Fort Wagner in South Carolina. Despite suffering terrible wounds, he took the American flag to the parapet of the fort and held it there while the rest of the assault was taking place.

After the battle, he was recognized for his bravery with the Medal of Honor. It is said that Carney was a brave and devoted soldier who made substantial contributions to the movement for freedom and equality. He is recognized for this today.

Abram Petrovich Gannibal, better known by his nicknames Hannibal and Abram Hannibal, was a native African who was born in the area that is now Ethiopia.

Abducted as a child, he was sold into slavery in Russia before being freed and going on to achieve great success as an officer and engineer in the Russian military.

Peter the Great’s godson Gannibal was an intelligent and capable military leader and engineer. He rose through the ranks to general and oversaw construction of numerous major Russian fortresses.

Gannibal was also widely admired in Russia as a poet and musician.

Because of the time and place in which he lived, Gannibal led an unconventional life and profession. His struggles were compounded by the fact that he was a person of color in a society that was generally unwelcoming to people of African descent.

His achievements as a leader in the fight for racial equality in Russia have been celebrated both at home and abroad.

As an adult, he became a preacher and secretly organized a rebellion among the people who were slaves on the plantation by utilizing the position he held as a preacher.

On August 21, 1831, Turner and a small group of followers began a rebellion, during which they were responsible for the deaths of many white individuals and the beginning of a wave of dread and violence throughout the South. The uprising was put down in the end, and Turner was finally apprehended, tried, and hanged for his crimes.

It is remembered as a pivotal moment in American history because of the considerable impact that his insurrection and the brutal response it sparked had on the debate about slavery in the United States.