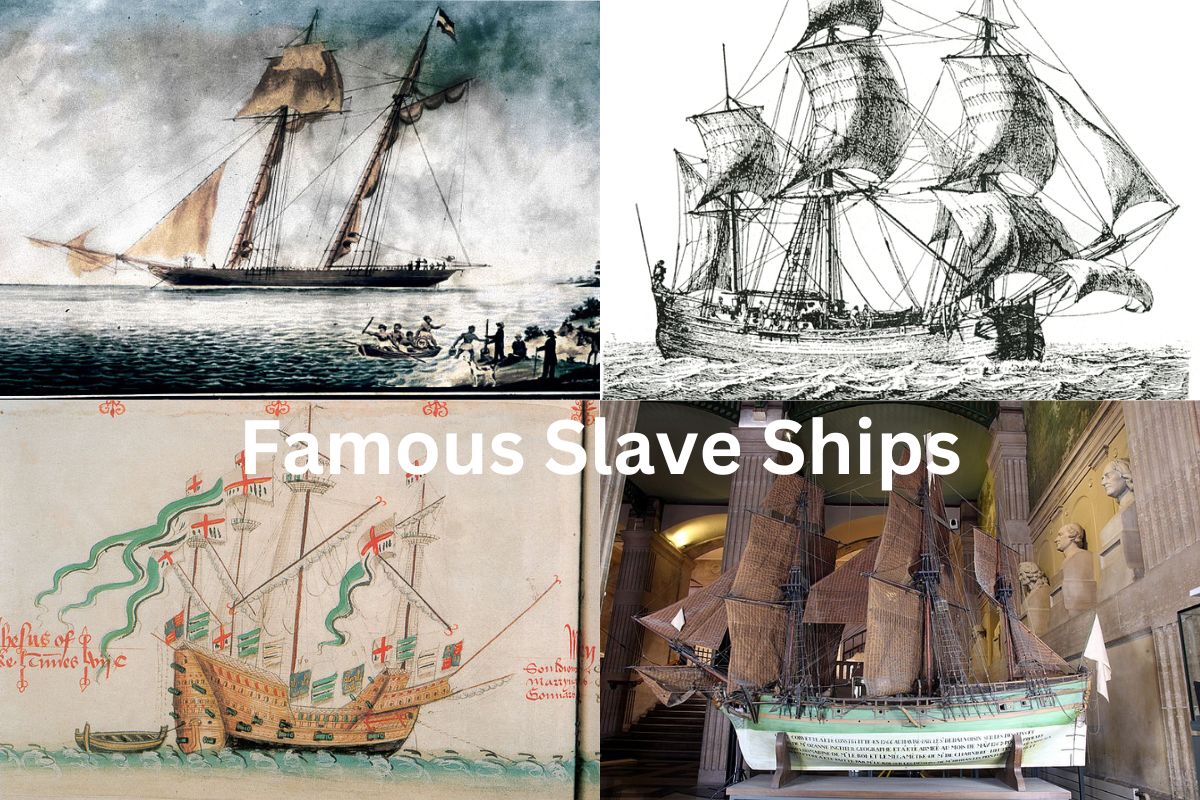 Although the worldwide slave trade was formally prohibited in the United States in 1808, illegal slave ships continued to transport enslaved Africans to the country until the Civil War.

Slavery was abolished in the United States in 1865, effectively ending the transatlantic slave trade and the employment of slave ships.

In the mid-nineteenth century, the Clotilda was a slave ship that trafficked slaves from Africa to the United States. It is thought to have made at least one trip to the United States in 1859, bringing around 110 enslaved Africans from the Kingdom of Dahomey (modern-day Benin) to Mobile, Alabama.

Because the international slave trade had been prohibited in the United States since 1808, the voyage was unlawful.

The Clotilda was owned by Timothy Meaher, a wealthy Alabama businessman and slave owner who funded the expedition in order to circumvent the slave trade law. Under horrific conditions, the enslaved Africans were carried to the United States and sold to Meaher and other slave owners in the Mobile area.

When the Clotilda’s journey was uncovered in the late 1800s, Meaher was arrested and prosecuted with violating the slave trade ban. He was eventually acquitted due to a lack of evidence.

After being submerged for more than 150 years, the Clotilda’s remnants were discovered in the Mobile-Tensaw Delta near Mobile, Alabama, in 2019. The discovery of the Clotilda rekindled interest in the history of slavery in the United States, as well as continued efforts to uncover and preserve this crucial aspect of American history.

La Amistad was a slave ship that rose to prominence in the mid-nineteenth century as a result of the efforts of the enslaved Africans being transported on the ship to earn their freedom.

During the voyage, enslaved Africans from present-day Sierra Leone and Angola rose up against their captors and took possession of the ship.

The enslaved Africans, led by Sengbe Pieh (also known as Joseph Cinqué), directed the ship’s navigator to proceed to Africa.

However, the navigator duped them and diverted the ship to the United States, where it was taken by the US Navy. The enslaved Africans were apprehended and accused of murder and piracy.

Their case, known as the Amistad case, was heard by the United States Supreme Court, which ultimately determined that the enslaved Africans were illegally transported and hence free.

The Amistad case was a landmark judicial win for the American abolitionist movement, and it helped to draw attention to the transatlantic slave trade’s evils.

The Marie Séraphique was a slave ship that operated out of Nantes, France, during the late 18th century and performed six slave trips.

A captain and second lieutenant are credited with painting two depictions of the ship that detail the route taken by captives. Slaves are depicted in both a blueprint of the ship’s cramped conditions and a picture of a sale of captives.

The Marie Séraphique, originally named Dannecourt, was built in Nantes and set sail for the first time in October 1764.

During its six journeys, the slave ship averaged 357 passengers. It was purpose-built and measured around 67 feet by 24 feet 5 inches (20.5 by 7.5 meters). When compared to other buildings of the time, it was quite standard.

The ship had two snow masts, making it more affordable, faster, and smaller by roughly 21 percent than a regular slave full-rigged ship (it would not have been called a “ship” in English at the time, a term describing a three-masted vessel).

It made one slave voyage under the name Dannecourt before being sold to Jacques Gruel in 1769. He decided to give the ship his wife’s Christian name, so he renamed it the Marie Séraphique.

The ship was renamed Sartine when he sold it after it made four slave journeys under his ownership. Using this moniker, it made its last slave journey.

The Royal African Company of London chartered a slave ship known as the Hannibal which made two trips in the Triangular trade carrying slaves.

The 450-ton, 36-gun sailing ship was made of wood. Its fateful journey in 1693–1695 is all but forgotten. The ship Hannibal was led by Captain Thomas Phillips.

From Brecon, Wales, this Welsh sea captain was hired by Sir Jeffrey Jeffreys and company, who ran the Hannibal and served as Royal African Company governors and assistants.

Phillips issued his first directive involving the slave trade when he was 28 or 29 years old. Of the 700 African slaves on board, he was directly responsible for the deaths of 328 (47 percent), as well as 36 of his crew of 70.

The Tecora was a Portuguese slave ship that sailed the Atlantic in the early nineteenth century. While some countries had already signed international treaties prohibiting the transportation of human beings as slaves across the Atlantic in the first decade of the 19th century, the brig was created specifically for the slave trade.

She was quick and nimble so she could outrun British patrols that looked for slave ships off the coast of Africa.

A group of Africans were abducted in 1839 from Mendiland (present-day Sierra Leone) and sent to the African slave port of Lomboko. About 500 of the Africans were sold to a slave trader, who took them to the port of Havana, Cuba.

The Beeckestijn was an Amsterdam-based slave ship that operated in the 18th century. An engraving by Hendrik de Leth shows her standing in front of the Dutch West India Company warehouses on the Prins Hendrikkade quay.

The Dutch West India Company held the Beeckestijn. Between the years of 1722 and 1736, she made seven trips carrying slaves from the west coast of Africa to the South American country of Suriname and the Caribbean island of St. Eustatius.

It is estimated that at least 1,000 of the enslaved Africans who were carried perished on their voyage, with the actual number likely being closer to 3,000.

With a crew of 63 and 26 cannons, the Beeckestijn set sail for the first time on February 19, 1721, from the Dutch port of Texel. Her captain for the expedition was Dirk de Wolf.

The slave ship Aurore arrived in Louisiana on June 6, 1719, carrying people from Senegambia.

In July of 1718, Captain Herpin set sail on the Aurore from Saint-Malo for the Bight of Benin. On August 28 she landed somewhere off the coast of Africa. Herpin started his slave hunt in the area around Whydah (Ouidah) and afterwards moved on to Cape Lahou.

To get to Louisiana, he left Africa on November 30 and landed on June 6. Despite the lengthy trip, only 200 of the 201 slaves Herpin had taken on board returned to him safely. On the other hand, eleven crew men did not make it back. On October 4th, Aurore sailed back to France and landed in Lorient.

Some features of the slave trade are depicted in sketches by an Aurore from a later time. Slaves on ships like the Aurore were crammed into a “spoon” configuration to maximize space and allow for as many people as possible to be transported. Slave legs were shackled to prevent rebellion.

The Dutch East India Company had many cargo ships of the hoeker type in the 18th century, including one named Meermin.

She was built in 1759 and 1761 as a slave ship, but her career was cut short when her Malagasy passengers rebelled.

They had been bought as slaves in Madagascar and sold to Dutch East India Company authorities for use in the Cape Colony.

After the mutiny in March 1766, half of the crew and over 30 Malagasy were killed when the ship was allowed to go aground off Struisbaai, in what is now South Africa.

The remains of the Meermin are still being sought by archaeologists.

The Free City of Lübeck was the site of construction for the carrack Jesus of Lübeck in the early 16th century.

Henry VIII, King of England, purchased the vessel in 1540 after it had been used primarily as a representative vessel.

In 1545, the ship participated in the French invasion of the Isle of Wight. After the Mary Rose sank during the Battle of the Solent, she and Samson were deployed in a futile attempt to raise the ship.

John Hawkins, who arranged four expeditions to West Africa and the West Indies between 1562 and 1568, chartered the Jesus of Lübeck to a group of merchants in 1563. The ship then became involved in the Atlantic slave trade and contraband.

In September 1568, near the coast of San Juan de Ula (present-day Vera Cruz, Mexico), Jesus and a few other English ships ran across a Spanish fleet.

As a result of the ensuing conflict, Jesus was injured and eventually captured by the Spanish. Damage estimates for the ship were so high that it was sold to a local merchant for only 601 ducats.

It was in 1789 and 1790 that the French corvette Robuste, purpose-built as a slaver and launched from Nantes, undertook her one and only trip.

With a complement of 22 guns, she patrolled the Channel after being purchased by the French navy in December 1793. In 1796, she was seized by the British and renamed HMS Scourge for service in the Royal Navy.

Before being sold by the British in 1802, she captured several French privateers, mostly in the West Indies.

On May 10th, 1789, Captain J.B. Magré set sail from Nantes on Robuste towards West Africa. She got to the Îles de Los on the 6th of October, when she rounded up her slaves. On July 21st, she departed from the West Indies.