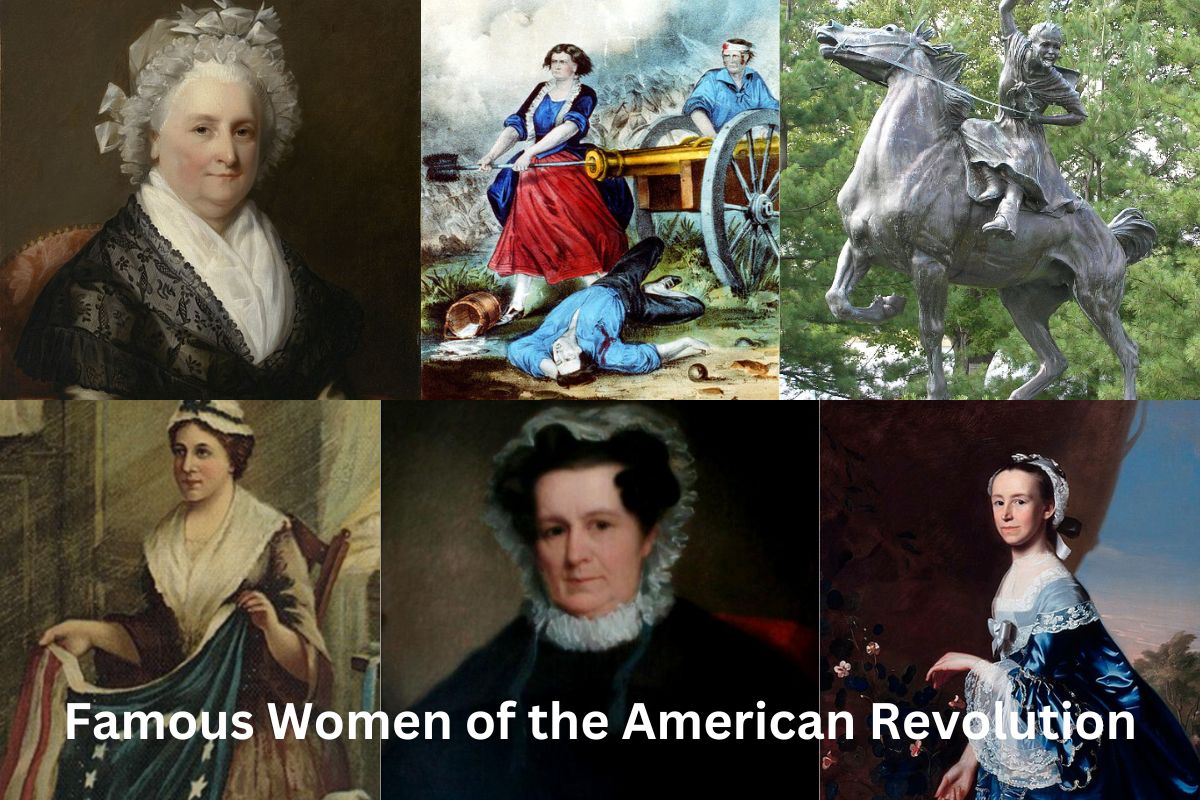 Despite social constraints, women performed crucial roles in the American Revolution. The role of women in the war effort was extensive; many spied for the enemy, smuggled supplies, and helped treat injured troops.

While their husbands were off fighting, they also ran companies and farms like men.

Deborah Sampson, who fought in the Revolution disguised as a man, and Abigail Adams, who advised her husband John Adams in their correspondence, are only two examples of influential women throughout the Revolution.

Women were able to break free of stereotypes during the revolutionary era and make substantial contributions to the fighting effort.

Famous Women of the American Revolution

Mary Ludwig Hays was an American Revolutionary War soldier who lived from October 13, 1754, until her death on January 22, 1832.

Despite popular belief, other women on the battlefield that day contributed to the legend that became known as “Molly Pitcher.” Hays is often credited as the woman behind the Molly Pitcher mythology.

Mary Ludwig is a native of the United Kingdom of America, having been born in Trenton, New Jersey. A tombstone at her burial site gives her birthdate as October 13, 1744, but this has been the subject of debate.

Her parents, Maria Margaretha and butcher Johann George Ludwig, raised a huge family that included her older brother Johann Martin. Since educated women were rare in her time period, it’s possible that she never went to school and never learned to read.

Her father passed away in January of 1769, and her mother wed John Hays the following June. In the early years of the 18th century, Molly wed William Hays, a barber in Carlisle, Pennsylvania. It has been documented that he served as artillery in the Continental Army during the 1778 Battle of Monmouth.

Dr. William Irvine called for a boycott of British goods on July 12, 1774, at a gathering in the Presbyterian Church in Carlisle to oppose the Tea Act, and William Hays’ name was on the list of individuals entrusted with enforcing the boycott.

John would frequently consult Abigail for guidance on a variety of issues, and the correspondence between the two is full of insightful conversations on various aspects of government and politics. Her letters also provide as eyewitness reports of the fighting on the home front during the American Revolutionary War.

Since 1982, the Siena College Research Institute has been conducting regular surveys of historians, and those surveys have consistently revealed that Adams ranks among the top three most highly rated first ladies in the assessments of historians.

Martha Dandridge Custis Washington was married to George Washington, the first President of the United States. She was born on June 2, 1731, and passed away on May 22, 1802.

Martha Washington was the first woman to hold the position of First Lady of the United States, even though the term “first lady” was not developed until after her passing. During her lifetime, she was frequently referred to as “Lady Washington,” which is how she became known to the public.

When Martha Dandridge was younger, she tied the knot with Daniel Parke Custis. They were blessed with four children, but only two of those children made it to young adulthood. After Daniel’s passing, Martha became a widow at the age of 26.

Washington was able to expand his personal estate by purchasing additional land because to the huge money that she brought into the marriage with her. She also took 84 dower slaves from Daniel Custis’ estate with her to employ during her lifetime. These slaves were delivered to her from the estate.

After her passing, they and their descendants became a part of the estate that belonged to Custis and were inherited by his successors. Although they were unable to have children of their own, George and Martha Washington did raise her two surviving children, John and Martha. In addition to that, they assisted both of their extended families.

Sybil (or Sibbell) Ludington was born on April 5, 1761, and passed away on February 26, 1839. Although she is hailed as a hero of the American Revolutionary War, the veracity of the narratives that credit her with this distinction has been called into question by modern researchers.

On April 26, 1777, the daughter of a colonel in the Colonial militia, Henry Ludington, is said to have made an all-night horseback ride of 40 miles (64 kilometers) to rally militia forces in neighboring towns in response to the burning of Danbury, Connecticut by British forces. She was only 16 years old at the time.

The small reference of Ludington’s ride that can be found in 1907 memoirs about her father, which were published privately by his granddaughters, serves as the basis for accounts of her ride. According to an article published in The New England Quarterly in 2015, there is few evidence to support the claim, and the existence of the trip has been called into question at least since 1956.

Ludington was mostly obscure during the 1870s; however, around the time of World War II, she became well recognized as a result of the placement of historic roadmarkers in sites that were suspected to have been visited by Ludington on her ride.

She is commemorated by memorial statues, and books have been produced on her life and achievements. She was recognized by having her image placed on a postage stamp that was released on March 25, 1975, as part of the United States Bicentennial celebration.

Elizabeth Griscom Ross was an American upholsterer who was credited by her relatives in 1870 with making the first official United States flag, which is why it is commonly referred to as the Betsy Ross flag. Elizabeth Griscom Ross was born on January 1, 1752, and died on January 30, 1836. She was also known by her second and third married names, Ashburn and Claypoole.

General George Washington, the chief commander of the Continental Army, along with two members of a congressional committee, Robert Morris and George Ross, are said to have paid a visit to Mrs. Ross in 1776, according to the Ross family tradition. However, the vast majority of historians discount this account.

Mrs. Ross persuaded George Washington to change the shape of the stars in a sketch of a flag that he showed her from six-pointed to five-pointed by showing him that it was easier and quicker to cut the latter. The sketch was of a flag that would later become the American flag.

However, there is no archival documentation or any other recorded oral tradition to support this account of the first flag to fly over the United States of America.

It would appear that the story was not brought to light until the writings of her grandson in the 1870s, more than a century after the event in question; prior decades contain neither a mention nor any documentation of the tale.

During the time of the American Revolution, Ross was responsible for making flags for the Pennsylvanian fleet.

She posed as a man, joined the Continental Army under the pretense of Robert Shirtliff, and participated in the fight for independence from Great Britain during the American Revolutionary War.

She served for 17 months in the war before her sexuality was discovered in 1783, when she required medical attention for an illness she had contracted in Philadelphia. She had been serving in the army.

After her true identity was revealed to her commanding officer at West Point, she was given an honorable discharge from the academy. After her discharge, Sampson met and married Benjamin Gannett in 1785.

In the year 1802, she made history by being one of the first women to give a series of lectures about her experiences during the war. In the year 1827, she passed away in Sharon, Massachusetts.

On May 23, 1983, she was recognized as the Official Heroine of the Commonwealth of Massachusetts, and in 1985, the esteemed United States Capitol Historical Society awarded the Commemorative Medal to “Deborah Samson” in her honor.

Phillis Wheatley Peters, (born about 1753 and died on December 5, 1784) is widely recognized as the first African-American woman to have a book of poetry published in the United States.

She was stolen from her home in West Africa when she was around seven or eight years old, taken to North America, and eventually purchased by the Wheatley family of Boston. The people around her recognized her knack for writing poems when she started to read and write.

Wheatley lauded King George III for vetoing the Stamp Act in 1768 in her poem “To the King’s Most Excellent Majesty.” Wheatley’s work took on a more revolutionary tone as the American Revolution gathered steam.

Wheatley met famous persons who became patrons during a trip to London with the son of her enslaver in search of publication in 1773. Her popularity spread throughout the British Empire and the American colonies after the September 1, 1773, publication in London of her Poems on Various Subjects, Religious and Moral.

Famous people like George Washington lauded her efforts. Jupiter Hammon, an African-American poet, acknowledged her work in a poem of his own a few years later.

Shortly after the book was out, Wheatley’s masters freed her. They both passed away quickly, and she wed John Peters, a struggling grocer. They suffered the premature loss of three children. Wheatley-end Peters’s came at the young age of 31 and in a state of abject poverty and obscurity.

American revolutionary Lucy Flucker Knox lived from August 2, 1756, until June 20, 1824. She was born to colonial official Thomas Flucker and Hannah Waldo, a daughter of Samuel Waldo.

During the American Revolutionary War, she was married to Henry Knox, a prominent officer in the Continental Army. Lucy stayed with Henry at the base camp while he was away at war. After Henry Knox’s retirement from the service in 1794, she stayed by his side.

Lucy and her husband were separated for the duration of the Revolutionary War. Unfortunately, she wasn’t able to visit the war camp as often as the wives of other officers.

Because she had already sacrificed all (her family) for this patriotic cause, Lucy Knox did not receive as many visits as other commanders’ wives. Her husband was opposed to her visiting and experiencing all the pain.

Lucy and Henry were apart for a long period, but they kept in touch with each other through letters. Their correspondence is housed at the Gilder Lehrman Institute of American History.

Both give us a glimpse into the lives of a military hero’s spouse and a first-hand account of one of the few persons who was close to General Washington.

Born on September 14, 1728, and passing away on October 19, 1814, Mercy Otis Warren was a prominent American poet, playwright, and pamphleteer during the Revolutionary War.

She wrote poems and plays in the years leading up to the Revolution that criticized the monarchy in Massachusetts and called for Americans to fight back against British oppression. She wed fellow patriot and freedom activist James Warren.

In 1788, she used the pen name “A Columbian Patriot” to publish a pamphlet opposing ratification of the United States Constitution and calling for the inclusion of a Bill of Rights called Observations on the new Constitution, and on the Federal and State Conventions.

It was long believed that other authors, primarily Elbridge Gerry, were responsible for Observations. Until her descendant Charles Warren discovered a reference to it in a letter to British historian Catharine Macaulay written in 1787, Warren was not given credit for writing it.

It was exceedingly unusual for a woman of her period to publish a collection of poetry and plays under her own name, but she did so in 1790. Her three-volume History of the Rise, Progress, and Termination of the American Revolution was published in 1805, making it one of the first works on the subject.