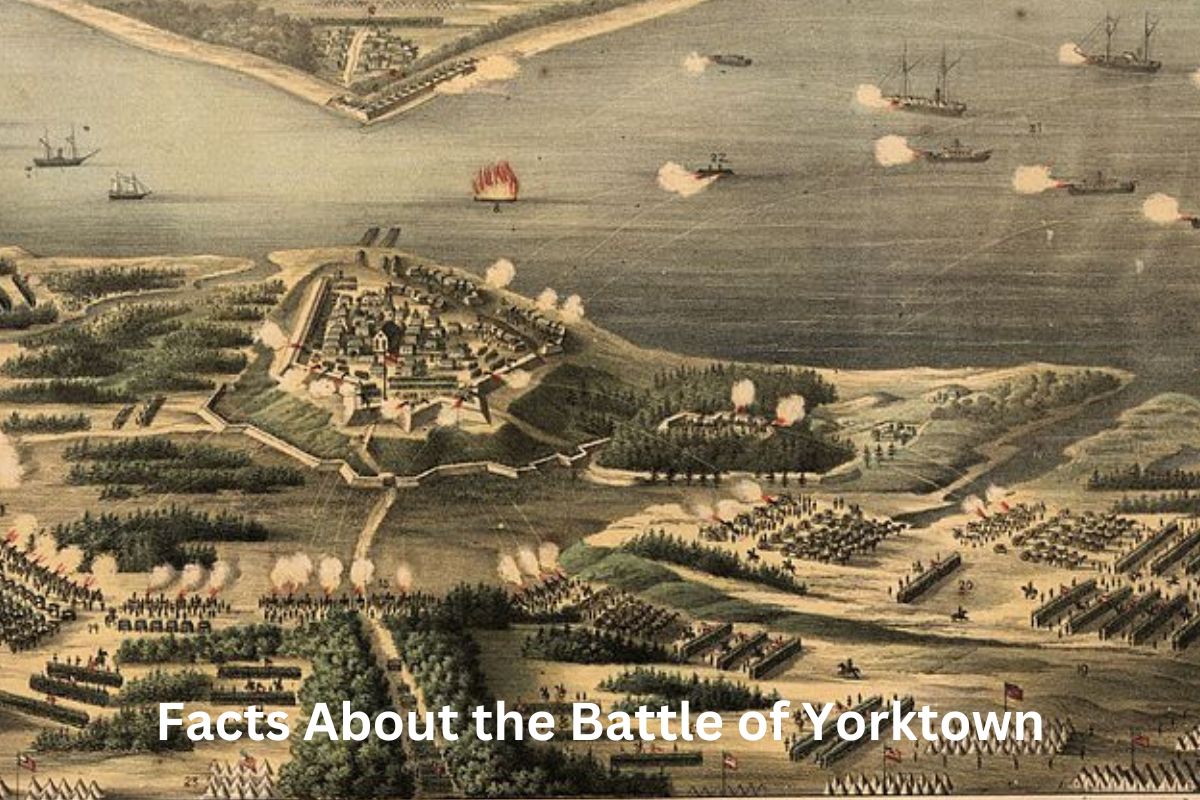 The Battle of Yorktown, also called the Siege of Yorktown, took place from September 28 to October 19, 1781. It was the most important battle of the American Revolutionary War.

The battle took place near Yorktown, Virginia, and was the last big land battle of the Revolutionary War. The British used to be in charge of the southern colonies, but the American and French armies were able to trap Cornwallis and his troops at Yorktown, which ended the war.

1. Artillery batteries and siege works were constructed by the American and French armies.

The American and French soldiers began the fight by encircling Yorktown and laying siege to the town before beginning their assault.

Also Read: Facts About the Battle of Lexington and Concord

The British military launched a number of assaults in an effort to break the siege, but their efforts were ultimately fruitless. Additionally, artillery batteries and siege works were constructed by the American and French armies in order to bombard the town and the British defenders.

After a few weeks of besieging, the British troops were eventually compelled to surrender on October 19, 1781 because they were running low on supplies.

This surrender effectively brought an end to the war and marked the beginning of a new era in the history of the United States of America as a nation.

3. Alliance between the United States and France

The Siege of Yorktown was an important event for a variety of different reasons. The American and French troops achieved a decisive victory, which ultimately led to the conclusion of the Revolutionary War.

4. The United States establishes itself as a new international power.

Since the American Revolution and the Battle of Yorktown heralded the birth of a new nation and a major actor on the world stage, they both had far-reaching effects on international affairs. This, in turn, altered the global political landscape and the distribution of power in significant ways.

Also Read: Most Famous Battles of the Revolutionary War

European powers were taken aback by the United States’ shocking victory over the British army and were eventually forced to acknowledge it as an independent nation. The United States’ future status as a global leader could not have been established without this acknowledgment of its importance.

The American people’s spirits were lifted and the nation’s sense of identity and purpose was strengthened by the triumph at Yorktown.

5. The French Navy’s efforts to prevent a British naval retreat were pivotal in the outcome of the conflict.

During the Battle of Yorktown, the French Navy was vital. The French navy, led by Admiral de Grasse, successfully blocked the Chesapeake Bay, making it impossible for Lord Cornwallis’s British army to flee by boat. The British army was essentially cornered at Yorktown, cut off from reinforcements and supplies due to the blockade.

The British Navy, led by Admiral Thomas Graves, was unable to enter the Chesapeake Bay and supply the forces at Yorktown thanks to the efforts of Admiral de Grasse’s fleet, which consisted of 28 ships of the line. That way, the American and French soldiers could encircle and besiege the town without worrying about the British fleet breaking the siege.

When the American and French troops’ artillery needed reinforcements, they relied on naval guns supplied by the French navy. Land-based guns couldn’t reach the position from which naval artillery fired at the British positions along the York River.

In total, the siege of Yorktown lasted around three weeks, from September 28 to October 19, 1781. In this period, American and French forces besieged Yorktown, isolating the beleaguered British garrison from outside assistance. Multiple British attacks meant to break the siege failed.

As the siege continued, food and ammunition for the British troops became increasingly scarce. Their position was also under constant fire from American and French guns. Consequently, the British forces were in a precarious position and were eventually compelled to surrender on October 19, 1781.

7. The Continental Army’s final significant engagement under George Washington’s command was the Siege of Yorktown.

The Continental Army, led by General George Washington, fought their final major combat of the American Revolution at Yorktown. Although there were a few more skirmishes and smaller battles after this, the British surrender at Yorktown officially ended the war.

Washington and his allies’ triumph at Yorktown was the capper to a series of strategic maneuvers that turned the tide of the war in their favor. The fight was the culmination of a well-organized campaign that saw the American and French forces working together and the French Navy, led by Admiral de Grasse, successfully blocking off the Chesapeake Bay.

It’s important to remember that the war wasn’t technically over until 1783, when the Treaty of Paris was signed. However, the Battle of Yorktown was the last major military engagement, and the British government’s realization that they couldn’t win the war and their army’s surrender there was a major setback.

8. Low deaths but heavy injuries on both sides.

The death toll from the Battle of Yorktown is poorly documented. On both sides, however, losses were predicted to be minimal, with the bulk of those hurt rather than killed.

It is estimated that roughly 200 Americans and French and 300 British were killed in action. These figures account for fatalities and injuries.

Keep in mind that war records from the time period in question were not as reliable as they are now, thus the figures presented below should be treated as approximations.

9. General Cornwallis did not show up for the surrender.

The general did not show up for the surrender rituals because he was sick.

At the formal surrender ceremony, Brigadier General Charles O’Hara, who stood in for Cornwallis, tried to hand over Cornwallis’ sword to French General Rochambeau. Instead of accepting O’Hara, Rochambeau rejected and sent him to General Washington.

10. The British were refused the traditional honors of war.

The British had asked for the usual honors of battle, which would allow the army to march out with flags flying, bayonets fixed, and the band playing an American or French music as a tribute to the victors. These honors are traditionally reserved for the victorious side.

However, Washington was adamant in his refusal to give the British any of the accolades that they had refused to bestow upon the victorious American forces during the siege of Charleston the previous year.