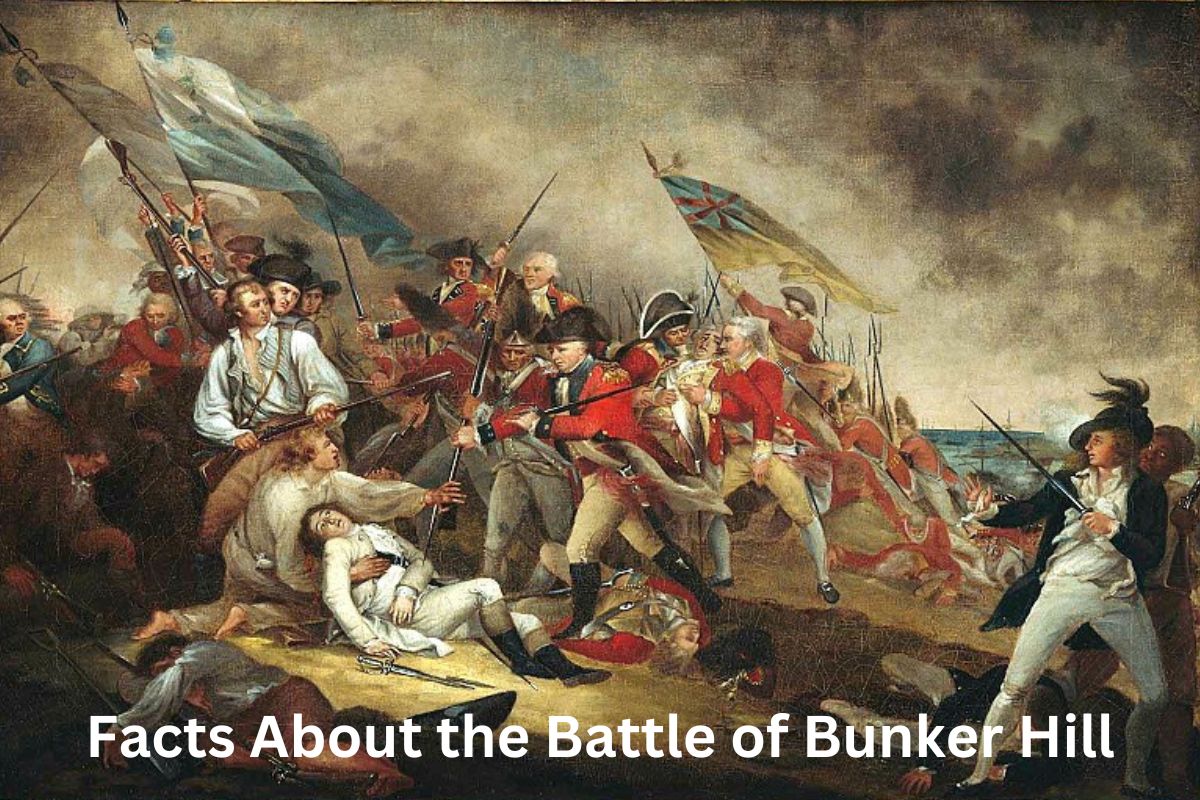 The Battle of Bunker Hill, which took place on June 17, 1775, was an important incident that took place during the American Revolutionary War.

The British army and the colonial troops, which were primarily comprised of local militia, engaged in combat during the fight that took place in Charlestown, which is located in the state of Massachusetts.

Breed’s Hill was an important elevation that overlooked Boston and the position that the British troops held within the city. The colonial soldiers, which were directed by William Prescott, were given the mission of fortifying and protecting this place.

However, because of a communication breakdown, the colonial soldiers ended up establishing their stronghold on the neighboring Bunker Hill instead.

1. The took the British three attempts to beat the colonial forces

The British army, which was commanded by General William Howe, attempted to sneak up on the colonial soldiers and make a surprise attack, but they were unsuccessful in their first two efforts.

On the other hand, the colonial forces were finally successful in failing in their third and last assault.

Despite this, the fight was regarded as a great win for the colonial forces since they were able to hold off the far better-trained and equipped British army for a considerable amount of time during the conflict.

2. The Colonial soldiers were not professionals

In the Battle of Bunker Hill, the British army faced off against colonial forces made up largely of local militia.

Volunteers from Massachusetts and the surrounding colonies made up the bulk of the fighting force.

They were neither professional soldiers or members of any military organization, but the desire to protect their communities from the invading British army inspired them to take up arms.

Also Read: Facts About the Battle of Yorktown

However, the British army consisted of highly trained and equipped professionals.

The colonial soldiers were still in the process of forming and training themselves to fight against the overwhelming British army when this early engagement took place in the Revolutionary War.

3. It was a costly victory for the British

In spite of their loss, colonial forces caused heavy casualties among the British forces. Although the British won the Battle of Bunker Hill, they did so at great expense, suffering over 1,000 losses, including over 200 dead.

The British army, one of the most formidable in the world at the time, suffered heavy losses in this engagement.

The colonial forces’ morale was boosted since they had proven they could defeat the British army, while the British suffered a serious setback because their army’s weaknesses were laid bare.

4. African-American and Native American soldiers served on both sides

African-American and Native American soldiers’ participation in the Battle of Bunker Hill is also historically noteworthy. African Americans served in both the British Army and the colonial troops, and they ranged from enslaved to free.

Despite the colonial troops’ ban on enlisting African Americans in their ranks, a number of slaves nevertheless joined the army and fought alongside whites. In exchange for their service, they were guaranteed to be set free. Some of them had escaped slavery and were now fighting for the colonial armies.

However, Native American troops joined the British army in exchange for financial and other benefits. Thayendanegea, a Mohawk chief, was in charge of these soldiers, most of them were members of the Six Nations of the Iroquois Confederacy.

Though their numbers were small, African-American and Native American soldiers fought in the Battle of Bunker Hill. Their presence at the battle exemplifies the diversity of the Revolutionary War’s combatants and the wide range of factors that pushed them to fight on either side.

5. The British were forced to rethink their overall war strategy

The British army suffered a heavy defeat at Bunker Hill, which prompted them to proceed with greater caution in their subsequent Revolutionary War battle plans and strategies.

The British army’s significant losses at Bunker Hill, coupled with the fact that they had to undertake three assaults to overcome the colonial forces, led them to conclude that the war would not be as simple as they had first believed.

After then, the British army played it safer in following battles, especially in the New York and New Jersey campaign.

Instead of attacking the colonial forces directly on, they used their naval advantage to seize control of strategic rivers and landing places.

By taking this strategy, the British were able to keep their grip on critical regions of the colonies without suffering the kind of devastating fatalities they did at Bunker Hill.

It’s also important to remember that the Battle of Bunker Hill changed the way the British army fought the Revolutionary War as a whole. The conflict resulted in the British abandoning their original plan to destroy the colonial army in a single decisive combat in favor of a more drawn-out and cautious strategy.

This not only afforded the colonial troops time to organize, train, and construct their own army, but it also delayed the war and increased the financial and human costs of the conflict.

6. Colonial forces almost held out with much lower numbers

Records from the past indicate that there were approximately 4,000 British soldiers present at the engagement, while the colonial forces consisted of approximately 1,200 men.

In spite of the enormous numerical disadvantage, the colonial forces were successful in withstanding two attacks from the British army before ultimately succumbing to their superiority during the third and final assault.

Even though they were outnumbered, the colonial forces were still able to cause a significant number of losses among the British soldiers.

Black soldier Peter Salem was pivotal at Bunker Hill. Historians have identified Peter Salem, an African American who was enslaved, as a member of the colonial militia. When it came to combat, nobody could match his skill with a gun or his fearlessness.

Major John Pitcairn, the British commanding commander, led the charge up the hill during the final charge of the British army.

There are no direct original documents that establish Peter Salem’s involvement in the killing of Major Pitcairn, hence the veracity of this tale is questioned among historians.

Although the colonial soldiers were outnumbered and outgunned by the British, they were able to flee and avoid arrest. However, it is known that Major Pitcairn was gravely wounded in the conflict.

The fact that African American troops like Peter Salem fought at Bunker Hill demonstrates the complexity of the Revolutionary War and the diverse incentives and reasons that pushed people to fight on both sides, regardless of the specifics.

A granite obelisk standing at 221 feet tall, the Bunker Hill Monument is a memorial to the soldiers who lost their lives at the Battle of Bunker Hill. Located on Breed’s Hill, the epicenter of the battle, this monument was unveiled in 1843.

Because of its prominence in American history, the monument is frequently visited by curious sightseers.

The decades-long process of building the monument was fraught with difficulty. The Bunker Hill Monument Association was established in 1823 to organize the fundraising and management of the monument’s construction.

Lack of funds and disagreements over the monument’s design were just two of the problems the association had to deal with. The monument’s cornerstone wasn’t placed until 1825, and construction didn’t wrap up until 1843.

The valor and perseverance of the colonial forces that fought at the Battle of Bunker Hill are commemorated at the Bunker Hill Monument, a famous historical site and a symbol of the American Revolutionary War.

9. Don’t fire until you see the whites of their eyes

It is unclear whether or not the famous order “Don’t fire until you see the whites of their eyes” was indeed given at the Battle of Bunker Hill.

The colonial forces were running low on ammunition, so they were told to wait to fire until they had a clean and close shot at the enemy. This is where the phrase got its start.

To be clear, there is no record of William Prescott or any other officer using this remark during the conflict, and no proof that it was ever spoken by either of them.

The phrase has grown widespread in stories and reconstructions of the Battle of Bunker Hill, despite the absence of evidence, and is typically used to signify the determination and discipline of the colonial forces.

10. The Death of General Warren at the Conflict of Bunker Hill

John Trumbull’s “The Death of General Warren at the Conflict of Bunker Hill” is more of an allegory than a literal picture of the battle and Warren’s death.

This is only one of several paintings by Trumbull that show pivotal moments during the American Revolutionary War.

The death of General Joseph Warren, a key leader in the colonial forces during the Battle of Bunker Hill, is depicted in the picture. While commanding an assault on the British, Warren was killed in action.

The picture by Trumbull depicts Warren’s death as dramatic and heroic, with the colonial flag he was holding in his hand as he pointed at the enemy.

Importantly, the artwork is not based on any particular historical event or eyewitness account of Warren’s death. Trumbull painted the scene decades after the war took place and he was not present at the time.

Most likely, he drew on his own knowledge of the conflict and the characters’ personalities to craft an allegorical interpretation of the event.

It is widely agreed that this picture is a seminal work of American art, having influenced public perception of General Joseph Warren’s part in the Battle of Bunker Hill and the American Revolution.