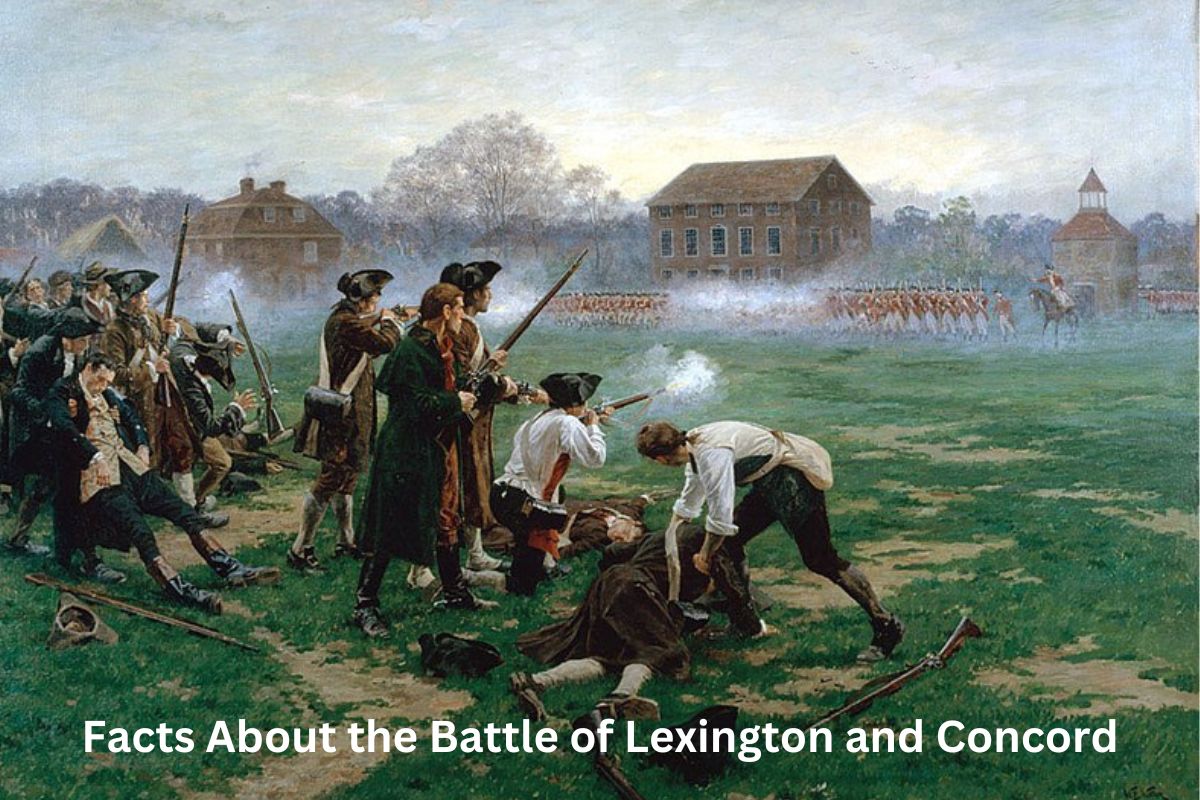 The battle was fought on April 19, 1775, at Lexington and Concord, Massachusetts, between the local colonial militia and British troops. It took place in the Commonwealth of Massachusetts.

The British were trying to capture colonial guns and arrest leaders of the local uprising, but the militia put up resistance to their efforts.

The conflict, which resulted in a win for the colonists, is often regarded as the first step in the development of the American Revolution.

Battle of Lexington and Concord Facts

Both Paul Revere and William Dawes were members of a company of riders known as the “Sons of Liberty.” This group was charged with disseminating information and warnings across the colonies.

They rode from Boston to Lexington and Concord on the night of April 18, 1775 to notify the local militia and leaders about the approaching British forces. This journey took place during the night.

Also Read: Facts About the Battle of Saratoga

Their warning gave the colonial militia time to prepare for the combat, which ultimately led to the victory of the colonial resistance fighters at Lexington and Concord. The ride that Revere took has become an important and recognizable part of American history, and it is frequently represented in popular culture.

2. “Shot Heard Round the World“ signified the beginning of the Revolution.

On Lexington Green, a colonial militia of around seventy men known as the Minutemen were met by a force of about seven hundred British soldiers led by Lieutenant Colonel Francis Smith.

The subsequent events are still up for question, but it is generally accepted that someone fired a shot, resulting in a brief exchange of gunfire. The “shot heard round the world” occurred at this meeting, which is widely recognized as the beginning of the American Revolutionary War.

Once in Lexington, British regular troops marched on to Concord, where they discovered and destroyed a modest number of supplies and weapons before moving on. The British began their march back to Boston, but they were harassed by militiamen, who were soon reinforced by even more men from the surrounding towns.

In history books, this conflict is referred regarded as the Battle of Lexington and Concord. When the British were defeated and forced to retire to Boston, it was widely hailed as a propaganda win for the Patriots and a morale boost for the insurrection.

3. Embarrassing defeat for the British.

The actual number of casualties from the Battle of Lexington and Concord is not known, and estimates vary. A larger number of British soldiers were killed than American ones, it is commonly accepted.

About 273 British soldiers were killed or injured during the battle. Roughly 95 people were killed or wounded while serving in the colonial militia. The combat was decisive for both sides, despite the low death toll.

For the mighty British army, the defeat was a great embarrassment, and for the Patriots, it was a rallying cry for their cause.

In addition to being a major morale booster for the Patriots, the Battles of Lexington and Concord marked a decisive moment in the American Revolution. Many colonists who had doubts about continuing the war now felt confident that the British could be vanquished.

4. First ever defeat for the British on American soil.

As the first time British soldiers were defeated on American soil, and as proof that the colonial militia could stand their ground against the strong British army, the Battle of Lexington and Concord is widely regarded as a pivotal moment in the American Revolution.

Many colonists who were on the fence about supporting the war were won over by the Patriots’ decisive victory at Lexington and Concord.

In addition to galvanizing support for the Patriots’ cause and embarrassing the British, the battle also had a significant effect on the British.

As a result, the British became more hostile towards the colonies, which stoked the flames of revolution and brought about the bloodiest conflicts of the war. Considered to be the first major battle of the American Revolution, it marked the beginning of the conflict.

5. The fighting continued as the British retreated back to Boston, with the colonial militia attacking them along the way.

The British army didn’t stop after the initial skirmish at Lexington; they marched on to Concord, where they searched for and destroyed colonial weapons and supplies. But the colonial militia, forewarned of the approaching British, had already evacuated or hidden the bulk of the supplies.

The British finished their task in Concord and started marching back to Boston, but they were harassed by the colonial militia, which had been joined by more and more troops from the surrounding towns.

The Patriots won a major victory when they drove the British back to Boston, which led to a siege of the city.

6. Lamps were used to signify the British advance.

The method that was utilized to notify the arrival of the British forces during the battles of Lexington and Concord became legendary.

Due to the fact that the British arrived by ship, there were two lamps strung up.

7. Many of the militia were relatives.

On April 19, 1775, Captain John Parker led the Lexington militia into battle against British forces. The community held him in high regard because of his service as a captain during the French and Indian War.

Many of the militiamen on Lexington Green were acquaintances and family from the neighborhood, making him a cousin of many of the men who fought under him. It’s a testament to how close-knit colonial towns were that over a quarter of the Lexington militia were related to Captain Parker.

A tremendous propaganda triumph for the Patriots, who were able to face up to the strong British army, Parker’s leadership and the cohesion of his soldiers played a vital role in the resistance against the British at Lexington.

8. The “Minute Men” made up the ranks of the militia.

At the time of the American Revolution, a “minuteman” was a member of the colonial militia. These were men who had prepared themselves for battle at a moment’s notice.

Minutemen were so named because they could be battle ready in less time than it took to empty a minute glass, a standard timepiece of the era. Recruited for their physical prowess and patriotic fervor, the Minutemen were typically young, healthy men.

Their weapons and tools were their own responsibility, and they were mostly farmers or artisans. Their towns relied on them as the first line of defense because they were the ones to arrive at the scene of an assault.

Although the Minutemen played a significant role in the Battle of Lexington and Concord, they were active throughout the colonies.

Numerous patriots from outlying towns and colonies began making their way to Boston, where the British were stationed, after the Battle of Lexington and Concord.

Even though estimates of the total number of militiamen who encircled Boston fluctuated throughout the month of April, it is safe to say that by the conclusion of the month, roughly 15,000 men had converged on the city. This group, which included numerous minutemen, laid siege to the city, effectively sealing off the British troops within from outside reinforcements and communication.

The name “Siege of Boston” is commonly used to refer to this long siege. The Patriots won a major victory when they drove the British back to Boston, which led to a siege of the city.

It was in March of 1776, after this siege, that British troops finally left Boston, marking a great triumph for the Patriots and a pivotal moment in the Revolutionary War.

10. Lieutenant Colonel Francis Smith was blamed for the loss.

He oversaw a British force of about 700 men, mostly grenadiers and light infantry. He sent his men marching toward Lexington and Concord, where they were greeted by armed citizens in the form of the local militia.

When the British failed to accomplish their goals, they were forced to return to Boston, where they suffered significant fatalities on the way back.

Poor leadership, poor decision-making, and a lack of preparation resulted to a devastating loss for the British army, and Lieutenant Colonel Francis Smith bore the brunt of the blame.