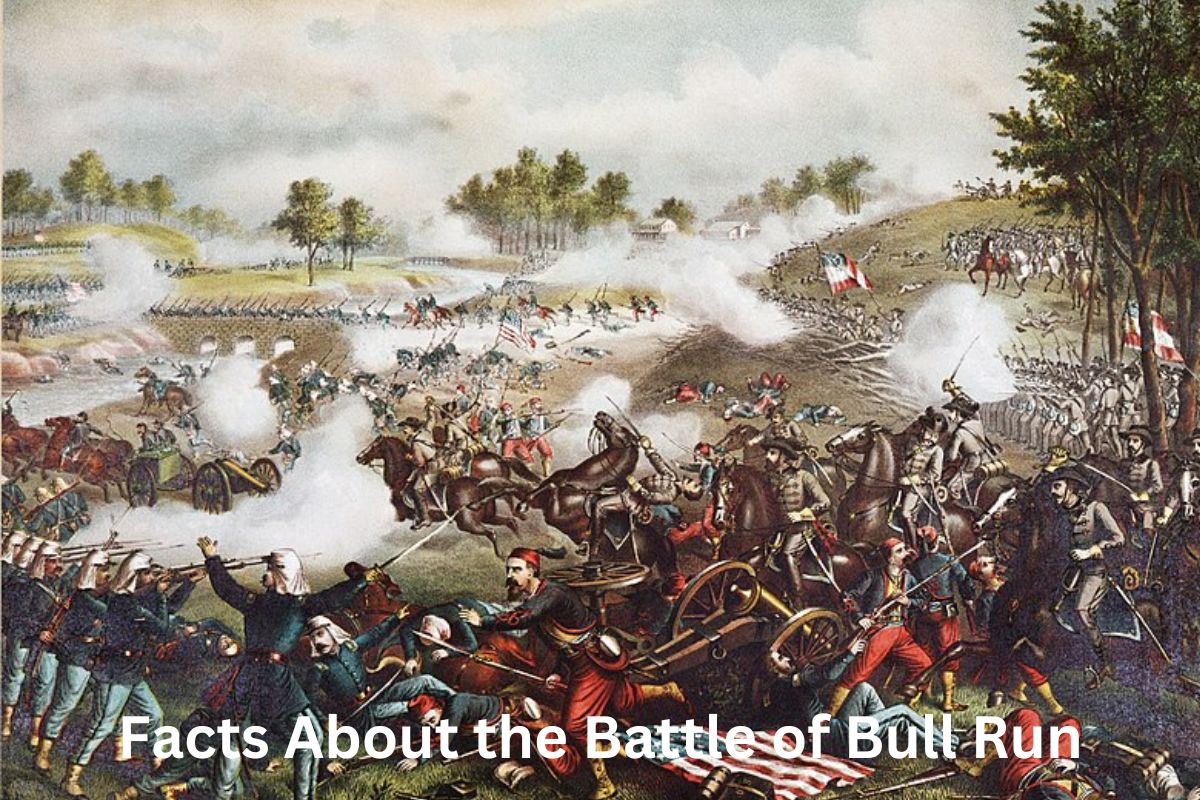 The Battle of Bull Run, also known as the First Battle of Manassas, was the first major battle of the American Civil War.

It was fought on July 21, 1861, near the Bull Run stream in Prince William County and Fairfax County, Virginia.

1. One of the largest battles of the Civil War.

It is estimated that there were approximately 35,000 Union soldiers and 28,000 Confederate soldiers participating in the Battle of Bull Run. The exact number of men on either side is unknown.

However, the exact number may have been different, and the total number of soldiers that participated in the conflict is still a topic of discussion among historians.

Soldiers from all around the United States, from both the Northern and Southern regions, participated in the conflict during the battle.

Both sides suffered severe losses as a result of the battle’s outcomes. The casualties sustained by the Confederate army were approximately 1,750, while the Union army suffered approximately 2,950 casualties.

It is estimated that there have been approximately 4,700 people killed in total. The conflict raged for a good portion of the day, beginning in the early morning and continuing well into the afternoon.

3. The Union army was forced to retreat to Washington D.C. after the defeat.

Despite having more soldiers and better equipment than the Confederate army, the Union army did not have a sufficient amount of time to prepare for the conflict.

The withdrawal of the Union army to Washington, District of Columbia, was disorderly and unorganized, with soldiers and people leaving the battlefield in a state of disarray.

4. Victory for the Confederacy served as a morale boost for the Southern states.

The victory acted as a morale boost for the Southern states, and it showed that the Confederacy was a formidable military force capable of defeating the Union army. The outcome of the battle made it clear that the war would be significantly more difficult and protracted than anyone had imagined.

The Confederate administration and military leaders gained confidence as a result of this success. On the other hand, the victory served as a wake-up call for the government of the Union, which realized that it was not going to be simple to win the war against the Confederacy.

During the Battle of Bull Run, cavalry from Virginia led by Colonel James Ewell Brown “Jeb” Stuart came on the battlefield. Their presence had a crucial bearing on the result of the conflict.

The Union troops were thrown into disarray and confusion as a result of the charge made by Stuart’s cavalry into the already disorganized mass of regiments. This charge, along with the strategies and years of experience possessed by the Confederate army, was a contributing factor in the Union army’s flight from the battlefield.

The appearance of Stuart’s cavalry was a pivotal moment in the conflict and was essential to the Confederacy’s eventual victory. His deeds and leadership throughout the combat helped reinforce Stuart’s image as a skilful and daring cavalry commander, which helped him win the war.

6. The rise of “Stonewall” Jackson.

The Confederate defense of Henry House Hill during the Battle of Bull Run is one of the most well-known aspects of the battle. The hill was an important strategic position on the battlefield, and the Union force would have profited significantly from gaining possession of it had they been able to do so.

Despite being outgunned and outnumbered, the Confederate forces led by Colonel Thomas J. Jackson were successful in holding off the onslaught of Union soldiers. The hill was defended with dogged determination and tactical brilliance by Jackson, who was essential to the Confederate victory.

Jackson would go on to become one of the most famous and recognized Confederate generals of the war, conducting many victorious campaigns and engagements for the Confederacy. His troops’ perseverance and bravery during this stage of the conflict earned him the nickname “Stonewall” Jackson.

Confederate soldiers surged with their bayonets drawn and screamed a terrifying high-pitched battle cry that became known as the “rebel yell” during Stonewall Jackson’s assault on Henry House Hill.

This battle cry, which was employed by Confederate soldiers and was famous for its high-pitched, disorienting sound, was designed to terrify and disorient their opponents during the American Civil War.

It was also considered to be a very successful technique of boosting the morale of the Confederate soldiers and creating a sense of solidarity among them. The “rebel cry” became an iconic and memorable feature of the American Civil War, and it is still remembered to this day as a sign of the bravery and resolve displayed by the Confederate soldiers who yelled it.

8. Many Northerners set up picnics and watched the Battle of Bull Run from neighboring hills.

As a result of widespread belief in the invincibility of the Union forces, many Northerners set up picnics and watched the Battle of Bull Run from neighboring hills. Because it was the Civil War’s first major combat, many Northerners expected an easy win for the Union.

They hoped that by fighting, the Confederacy could be destroyed and the Union might be maintained. As a result, many onlookers, including women and children, carried picnic baskets with them to the battlefield and treated the conflict as if it were a performance.

Many Union soldiers, however, were taken aback when the Confederate force ultimately prevailed, since they had assumed they would easily triumph.

When the Union army was cornered, they were forced to retire, and many innocent citizens were hurt or killed in the ensuing confusion and mayhem on the journey back to Washington, DC.

This tragedy served as a sobering reminder of the brutality of war and the toll it takes on individual lives, and it demonstrated that the war would not end quickly but would demand substantial effort and investment.

9. A spy named Rose Greenhow fed information to the Confederacy.

Using her status as a prominent socialite in Washington, D.C., and her connections within the community, she was able to learn crucial details about the Union army’s intentions and activities.

As a result of Greenhow’s report, Confederate General P.G.T. Beauregard was able to better prepare for the Battle of Bull Run. It is thought that the outcome of the battle could have been different if Greenhow hadn’t provided vital intelligence to the Confederates.

She was taken prisoner by the Union after the battle and imprisoned for a while. She continued her job as a spy for the Confederacy after her release, but was eventually arrested and sent into exile in 1864.

10. Following the battle General Irvin McDowell was removed from command.

After the Union was defeated at the Battle of Bull Run, General Irvin McDowell was removed from command. Many people blamed the Union’s loss on McDowell’s poor leadership and tactics throughout the conflict.

In the eyes of the Union government, he failed to adequately prepare the troops for battle and failed to carry out the battle strategy. Therefore, George B. McClellan succeeded McDowell as commander.

The Union government’s unhappiness with the battle’s outcome and their need for a more seasoned leader to lead the army led to McDowell’s dismissal.

Nevertheless, McDowell went on to lead the Union army in subsequent fights including the Second Battle of Bull Run and the Battle of Fredericksburg.