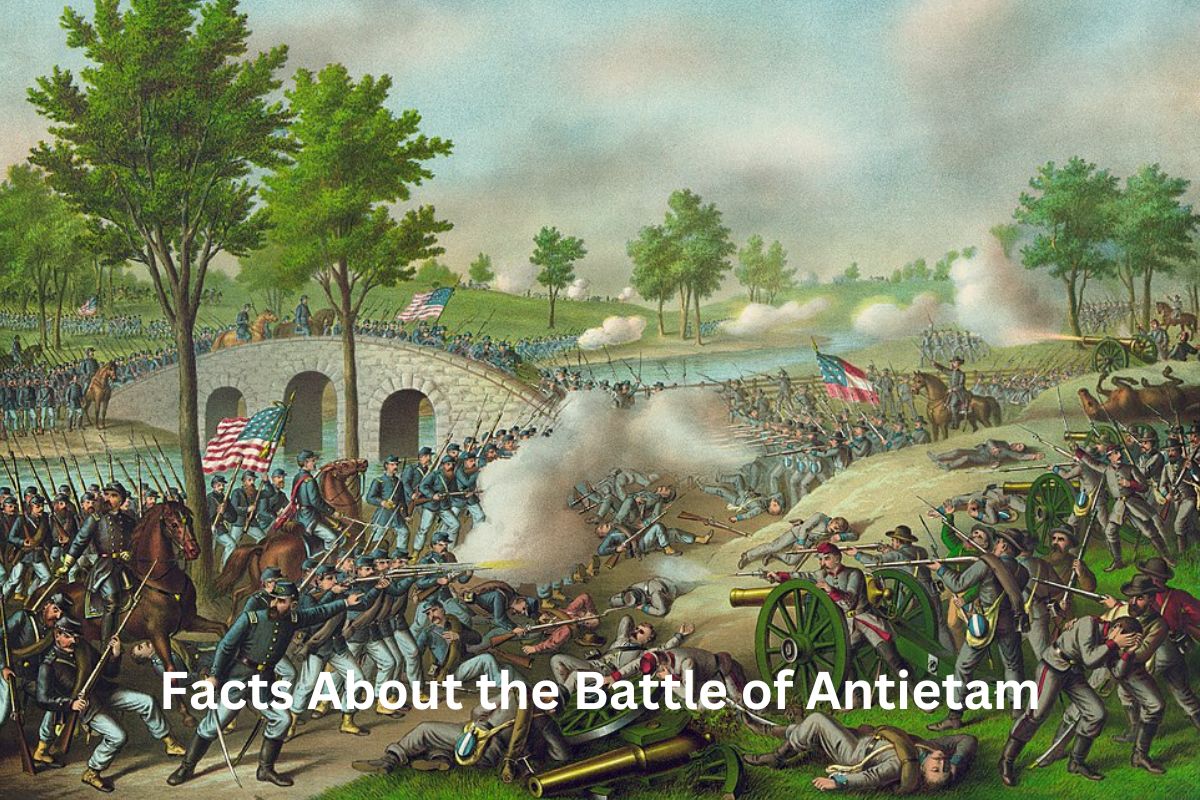 The battle was fought between the Union Army of the Potomac, led by General George B. McClellan, and the Confederate Army of Northern Virginia, led by General Robert E. Lee.

The battle was the culmination of the Confederate Army’s first invasion of the North, and was the bloodiest single day of the Civil War, with over 23,000 total casualties.

Also Read: Most Important Battles of the Civil War

The Confederate army was defeated (1,546 killed, 7,752 wounded and 2,020 missing). It was the single bloodiest day of combat in the history of the United States, and both sides suffered significant casualties.

The battle was also significant because it prompted President Abraham Lincoln to issue the Emancipation Proclamation, which declared that all slaves in the Confederate states were to be freed.

President Abraham Lincoln’s decision to issue the Emancipation Proclamation was heavily influenced by the outcome of the Battle of Antietam.

Lincoln had been thinking about abolishing slavery for some time, but he was hesitant to act on the proposal for fear of upsetting the border states that were still loyal to the Union but had not yet abolished slavery.

Also Read: Facts About the Battle of Chancellorsville

Lincoln saw a chance to deal a blow to the Confederacy and address slavery after the Union victory at Antietam.

All slaves in Confederate states “will be then, thenceforward, and permanently free,” he proclaimed in a preliminary Emancipation Proclamation dated September 22, 1862.

Due to the fact that the Emancipation Proclamation only applied to states that were in rebellion and not under Union control, it took some time for it to be fully implemented. Yet, it was a major advance in the fight to end slavery in America.

3. Included the Battle of Burnside’s Bridge

Throughout the day, Union and Confederate forces engaged in a series of brutal and bloody clashes, including the famous Battle of Burnside’s Bridge.

General Ambrose Burnside’s Union troops attempted to cross Antietam Creek and attack the Confederate army at Burnside’s Bridge, one of the battle’s most important battles.

Confederate fire drove Union troops back as they tried to cross the bridge. Both sides suffered heavily at Burnside’s Bridge.

The Confederates held the bridge despite the Union’s greatest efforts. Burnside’s Bridge was one of the bloodiest and most decisive battles of Antietam.

4. Despite suffering heavy losses, Union forces were eventually able to push the Confederates back and force them to retreat across the Potomac River.

Despite tremendous losses, Union soldiers repelled the Confederate invasion of Maryland and forced General Robert E. Lee’s Army of Northern Virginia to retreat across the Potomac River into Virginia.

Union victory at Antietam stopped Confederate advance into the North.

George B. McClellan defended Washington D.C. and Baltimore, allowing Lincoln to issue the Emancipation Proclamation and shift the war’s course.

The combat was a tactical tie, but the Union army won strategically, forcing the Confederacy to retire for the first time in the war.

5. The battle began early in the morning, when Union forces launched an attack on Confederate positions near the town of Sharpsburg.

The Union army caught up with General Robert E. Lee’s Army of Northern Virginia near Sharpsburg after several days of pursuit.

Union troops attacked Confederate positions near Dunker Church around 5:30 am on the northern end of the battlefield.

Union troops fought for control of the Sunken Road, commonly known as “Bloody Lane,” in the battlefield center.

6. The Battle of Antietam was a turning point in the Civil War and is still remembered and studied today as a key example of military strategy and tactics.

The Union army is credited with a tactical draw but a strategic triumph in the Battle of Antietam, which was fought in Maryland during the American Civil War.

The conflict was characterized by a succession of violent and bloody battles, and it served as an important example of the significance of outstanding logistics, communication, and coordination in the context of war.

Military historians and students of warfare continue to study it to this day because it demonstrates how the Union army was able to capitalize on its superior resources and organization to achieve victory.

7. The battlefield at Antietam is now a national park

Antietam National Battlefield is a national park that preserves the battlefield so that future generations can learn about the battle’s significance and visit the actual sites where major events took place.

Over 3,000 acres of the original battlefield are preserved in the park, along with monuments, memorials, and other historical features honoring the battle’s participants and those who died defending their country.

Guided tours, self-guided walks, and a visitor center all give park-goers the opportunity to learn more about the fight and its significance.

The North Woods, Cornfield, Dunker Church, Sunken Road, Burnside Bridge, and the Pry House Field Hospital Museum are just a few of the highlights of the park’s many walking tours.

The Pry House Field Hospital Museum, which served as Union headquarters and a field hospital during the battle of 1862, is the sole building to survive from that year.

The Antietam National Battlefield is a great place to visit for anyone interested in learning more about the Civil War, as it is open year-round, is easily accessible, and does not cost anything to enter.

8. The Battle of Antietam was the subject of a famous painting by artist Winslow Homer called “The Sharpsburg Campaign.”

Winslow Homer painted a classic piece titled “The Sharpsburg Campaign,” which depicted the events of the aftermath to the Battle of Antietam. The human cost of the conflict, in terms of lives lost and injuries sustained, is captured in the picture.

There are a few bodies visible in the background of the artwork depicting a group of injured and fatigued soldiers resting on the battlefield. An ominous and realistic manner is used to depict the situation, which effectively conveys the sadness and misery of the conflict.

Four years after the fight, in 1866, Homer painted it and displayed it for the first time in New York’s National Academy of Design. Both the people and the press agreed that it was one of Homer’s most influential works, and it garnered largely positive reviews.

The Metropolitan Museum of Art in New York City eventually purchased the painting, and it remains on exhibit there to this day.

The Civil War and its toll on humanity are vividly depicted in Homer’s “The Sharpsburg Campaign,” widely regarded as one of the greatest works of American art.

It is a moving tribute to the bravery of the soldiers who fought there and the effect the conflict had on the local population.

9. In addition to the main battle, there were several smaller skirmishes and engagements that took place around Antietam during the course of the day.

Besides the main action at Antietam, there were other smaller skirmishes and engagements throughout the day.

These lesser battles were furious and brutal, but they didn’t affect the battle’s outcome.

Confederate troops under General James Longstreet tried a flank attack on the Union army on the east side of the battlefield. General Joseph Hooker’s Union troops held off the Confederate attack.

These little engagements remind us that the combat was fierce and deadly throughout the day, not just on the major front.

10. Many of the soldiers who fought in the Battle of Antietam were young and inexperienced

The Battle of Antietam was the first battle for many young, inexperienced men.

Volunteers from both sides fought for their causes in the army. These soldiers had no military training and were unprepared for battle.

These men were unprepared for the psychological and emotional toll of battle. Antietam left many with combat exhaustion, shock, and other mental health difficulties.