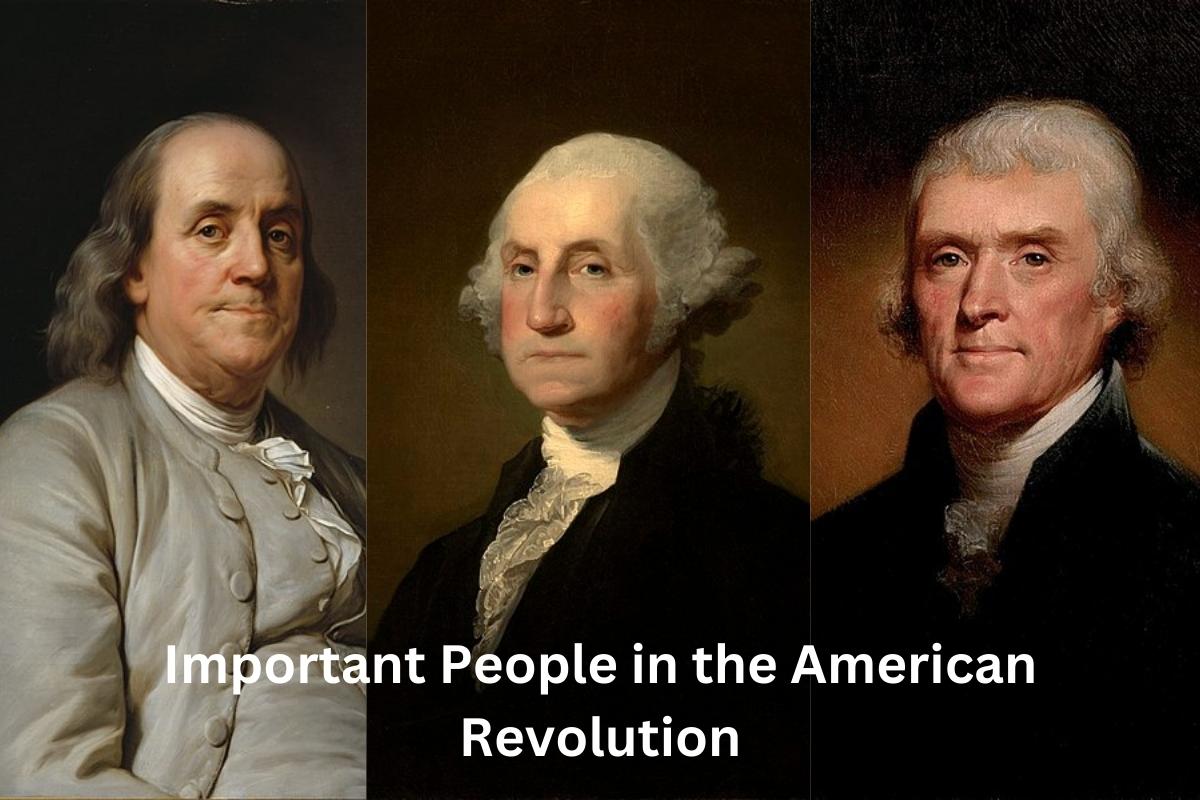 Between 1765 to 1791, British America saw an intellectual and political upheaval known as the American Revolution.

The 13 Colonies established independent nations that defeated the British in the American Revolutionary War (1775-1783), winning independence from the British Crown and building the constitution that gave birth to the United States of America, the first modern constitutional liberal democracy.

Among the key outcomes of the revolution were American independence and the abolition of British mercantilism in America, which opened up global commerce for the US—including resumption with Britain.

Approximately 60,000 Loyalists of the American Revolution emigrated to other British colonies, mostly Canada, although the vast majority stayed in the United States.

Below are some of the most important People in the American Revolution.

Important People in the American Revolution

As commander of the Continental Army, Washington led the Patriot troops to victory in the American Revolutionary War and served as president of the Constitutional Convention of 1787, which established the United States Constitution and the American federal government.

Washington has been dubbed the “Father of the Nation” for his exemplary leadership throughout the country’s formative years.

Washington has been remembered with monuments, a federal holiday, different media images, geographical sites, including the national capital, the State of Washington, stamps, and money, and he is regarded as one of the finest U.S. presidents by many historians and ordinary Americans alike.

Thomas Jefferson was an American politician, diplomat, lawyer, architect, philosopher, and Founding Father who served as the third President of the United States from 1801 until 1809.

Jefferson, the Declaration of Independence’s major author, was a proponent of democracy, republicanism, and individual liberties, inspiring American colonists to secede from the Kingdom of Great Britain and start a new country.

At the state, national, and international levels, he created crucial papers and decisions.

Jefferson represented Virginia in the Continental Congress that adopted the Declaration of Independence during the American Revolution. As a Virginia politician, he developed a religious freedom bill.

During the Revolutionary War, he was the second Governor of Virginia, serving from 1779 to 1781. Jefferson was appointed as the United States Minister to France in 1785, and then as the country’s first Secretary of State under President George Washington from 1790 until 1793.

As an envoy for numerous colonies, Franklin became a national hero in America when he led a drive in London to have the Parliament of Great Britain abolish the unpopular Stamp Act.

As American minister to Paris, he was well respected by the French and was a key factor in the establishment of friendly Franco-American ties. His efforts were critical in winning French backing for the American Revolution.

He was involved in local, colonial, and state politics, as well as national and international issues. He was governor of Pennsylvania from 1785 until 1788.

He first owned and traded slaves, but by the late 1750s, he had become an abolitionist and advocated for education and the integration of African Americans into American culture.

Patrick Henry (May 29, 1736 – June 6, 1799) was an American lawyer, landowner, politician, and orator most remembered for his declaration at the Second Virginia Convention (1775): “Give me liberty, or give me death!”

Henry participated as a delegate to the First and Second Continental Congresses in 1774 and 1775, when he signed the Petition to the King, which he helped prepare, and joined the Continental Association.

He acquired further favor in Virginia by his oratory at the assembly and by marching soldiers towards the colonial capital of Williamsburg following the Gunpowder Incident until the royal government’s stolen armaments were paid for.

When the Fifth Virginia Convention backed independence in 1776, Henry participated on the committee responsible with creating the Virginia Declaration of Rights and the first Virginia Constitution. Henry was elected governor under the new charter immediately and served a total of five one-year terms.

He vigorously opposed adoption of the United States Constitution, both because he feared a large central government and because there was no Bill of Rights at the time. In his last years, he returned to the profession of law, refusing multiple federal government positions.

He had been a slaveholder his whole adult life and desired to see the institution collapse, but he had no plans other than to stop the importation of slaves. Henry is famous for his oratory and as an ardent supporter of the American Revolution.

He is primarily recognized for being one of Vermont’s founders and for capturing Fort Ticonderoga early in the Revolutionary War. He was Ira Allen’s brother and Frances Allen’s father.

Allen spoke before the Continental Congress on behalf of Vermont as early as September 1778, requesting recognition as an independent state.

He said that Congress was hesitant to give Vermont independent statehood owing to Vermont’s growth to incorporate border towns from New Hampshire.

Between 1780 and 1783, Allen and others spoke with Frederick Haldimand, the governor of Quebec, nominally concerning prisoner exchanges but, in reality, about establishing Vermont as a new British province and receiving military protection for its population.

On this day in history, October 2, 1803, we celebrate the life and legacy of Samuel Adams (September 27, 1722 – October 2, 1803), a Founding Father of the United States and a prominent political figure in American history.

He was a politician in early American Massachusetts, a key figure in the events that would eventually spark the American Revolution, and a key figure in the development of the ideals of American republicanism that would come to define the political landscape of the young nation. Similar to President John Adams, he was a Founding Father and a relative via marriage.

His achievements in leading his fellow colonies toward liberty were lauded in 19th century accounts since he was a key figure in the movement of independence that preceded the Revolutionary War.

Adams was represented as a master of propaganda who induced “mob violence” to accomplish his aims in scathing reviews written mostly by British historians in the early part of the 20th century, which cast doubt on this interpretation.

He led American forces in a number of engagements, notably the siege of Yorktown. He was a crucial player in the French Revolution of 1789 and the July Revolution of 1830 after returning to France. In both nations, he is regarded as a national hero.

Crispus Attucks (1723 – March 5, 1770) was an African and Native American whaler, sailor, and stevedore who was often considered as the first person slain in the Boston Massacre and hence the first American killed in the American Revolution.

While he is most known as the first American fatality of the Revolutionary War, eleven-year-old Christopher Seider was killed by the British a few weeks earlier.

Historians debate whether Attucks was a free man or an escaped slave, but they all agree that he was of Native American (particularly Wampanoag) and African heritage.

Two important sources of eyewitness evidence concerning the Boston Massacre published in 1770 did not refer to him as “black,” indicating that Bostonians saw him as of mixed ancestry.

He was a “Mulattoe man, called Crispus Attucks, who was born in Framingham, but recently belonged to New Providence, and was here in order to sail for North Carolina,” according to a contemporaneous article in the Pennsylvania Gazette.

In the mid-nineteenth century, Attucks became a symbol of the anti-slavery cause. Supporters of the abolitionist movement praised him for playing a heroic role in American history.

Historians refer to him as Chatham or William Pitt the Elder to differentiate him from his son, also a prime minister, William Pitt the Younger. Pitt was also known as the Great Commoner because he refused to take a title until 1766.

Pitt is most recognized as Britain’s wartime political leader during the Seven Years’ War, particularly for his single-minded determination to triumph over France, a victory that cemented Britain’s control over international affairs.

He is also known for his popular appeal, opposition to government corruption, support for the American position in the run-up to the American Revolutionary War, advocacy of British greatness, expansionism, and empire, and hostility toward Britain’s main adversaries and rivals for colonial power, Spain and France.

Mary Ludwig Hays (October 13, 1754 – January 22, 1832) was a woman who fought in the Battle of Monmouth during the American Revolutionary War.

The lady behind the Molly Pitcher mythology is most generally identified as Hays, although the narrative is likely the result of other women spotted on the battlefield that day.

Mary Ludwig was born in Trenton, New Jersey, in the United Kingdom of America. Her birth date is disputed, although a tombstone at the cemetery where she is buried identifies her birth date as October 13, 1744.

Her family was relatively sizable, including her elder brother Johann Martin; their parents were Maria Margaretha and butcher Johann George Ludwig. She most likely never went to school or learned to read since education was unusual among females at the time.

Her father died in January 1769, and the following June, her mother married John Hays. Molly married William Hays, a barber in Carlisle, Pennsylvania, in early 1777. According to Continental Army documents, he was an artilleryman during the Battle of Monmouth in 1778.

On July 12, 1774, during a meeting in the Presbyterian Church in Carlisle, Dr. William Irvine organized a boycott of British products in protest of the Tea Act, and William Hays’ name appeared on a list of those assigned with implementing it.