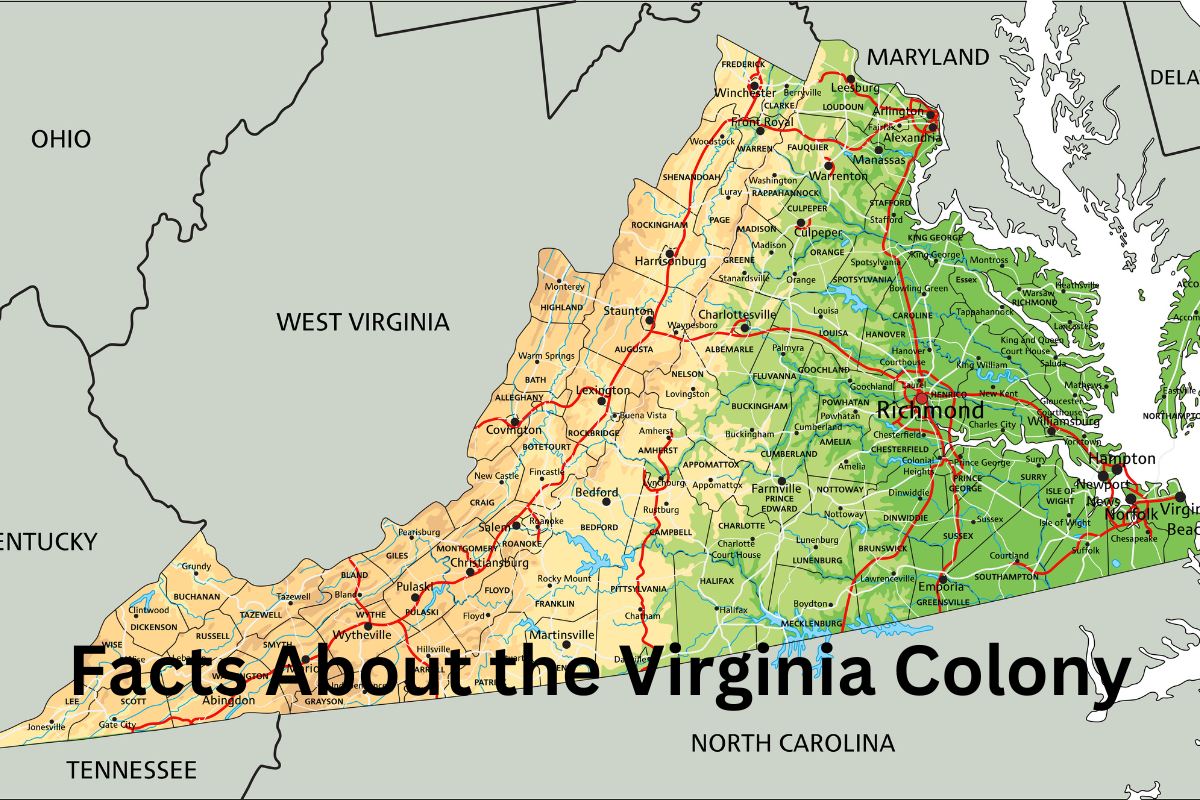 The Virginia Colony was the first English settlement to be established as a permanent settlement in the Americas. The London Company founded the colony in 1607 on the coast of what is now the state of Virginia in the United States. The colony’s original location is unknown.

The early years of the colony were distinguished by conflicts with the native American tribes that lived in the area as well as by harsh living circumstances. Tobacco, however, became a major cash crop during the 17th and 18th centuries, and the colony finally developed to the point where it became a leading producer of the commodity.

In the end, the colony was incorporated into the Commonwealth of Virginia, which eventually evolved into the state of Virginia in 1788.

1. Initial Settlement was in Jamestown

Jamestown, the first settlement in what would become the Virginia Colony, was founded in 1607 by the London Company, which was a consortium of English businessmen.

In its early years, the colony struggled against a variety of obstacles, including as sickness, hostilities with neighboring Native American groups, and a lack of food supplies.

However, in 1610, a group of new settlers came in the colony with supplies and reinforcements, which assisted in the colony’s ability to endure and eventually thrive.

2. More Than Half of the Settlers Died in the First Year

The first year in Jamestown was a trying and unsuccessful one for the colonists who founded the settlement. Many of the first settlers arrived in the New World unprepared for the difficult living conditions they would face there, and they were also unfamiliar with the climate and ecosystem of the area.

Because of this, more than half of the original settlers passed away during the first winter owing to a variety of causes including sickness, germs in the water, and malnutrition. In addition, some of the settlers became infected with germs from animals.

Cannibalism and chewing leather off their own boots were two of the desperate measures that some of the early settlers used because the situation had gotten so bad.

The Virginia Company, which had founded and controlled the colony, lost its charter in 1624, and the colony was taken over by the English crown and proclaimed a royal colony.

This meant that the Virginia Company no longer controlled and managed the colony, but rather the English Crown through appointed governors.

The transformation from a commercial company-controlled colony to a royal colony had enormous consequences for the colony’s people and politics, as laws, governance, and land distribution were altered, and colonists were now subject to the will of the King and his appointed officials.

The change in governance had an influence on the economy as well, as the colony was now directly controlled by the English government, which could regulate commerce and taxation, and the colony’s principal cash crop, tobacco, was now subject to English government control.

4. Tobacco Was the Main Crop

Tobacco quickly became a key cash crop for the Virginia colony, aiding its fast growth over the next few years. The region’s fertile soil and warm temperature were ideal for cultivating tobacco, which quickly became one of the colony’s most important exports.

Tobacco was in high demand in Europe, and it became a key source of wealth for the colony. As a result, the colony’s population and economy expanded fast, and it rose to prominence as one of the most important colonies in the English New World.

The success of tobacco farming also resulted in the development of a plantation system, in which rich landowners grew tobacco utilizing enslaved African labor. For centuries, this system of slavery was one of the key drivers of the colony’s economy, and it had a lasting impact on the region’s history.

5. It had a General Assembly

The General Assembly served as Virginia’s colonial legislative from 1619 to 1775 or 1776, during which time it was responsible for governing in collaboration with a colonial governor.

Jamestown, located on the James River, served as the capital of the Virginia colony up until the year 1699; after that year, Williamsburg served in that capacity until the colony’s dissolution.

The outbreak of Bacon’s Rebellion in 1676 marked the beginning of the colony’s first significant period of political unrest.

6. Became the Commonwealth of Virginia

The Virginia colony became the Commonwealth of Virginia, one of the original thirteen states of the United States, in 1775, after formally declaring independence from the Kingdom of Great Britain in 1775.

At that time, the Declaration of Independence had not yet been officially adopted. “The Old Dominion” was selected to serve as the Commonwealth of Virginia’s official slogan.

At the time of greater American independence in July 1776, the colony of Virginia covered or claimed jurisdiction over a large chunk of the land that would later become the states of West Virginia, Kentucky, Indiana, and Illinois, as well as parts of Ohio and Western Pennsylvania.

7. The Virginia Colony Had Many Wars with the Natives

Several wars sprang out between the English and the Virginia Indians as they spread out from Jamestown. This was due to the English’s persistent and rapid encroachment into Indian territory.

Throughout the majority of the 17th century, the primary point of contact and warfare between the English and any of the coastal Algonquian peoples was the Powhatan Confederacy.

8. The Anglican Church was the State Religion

The Anglican Church was formally recognized as the colony’s state religion in 1619, and it remained in that role until just after the American Revolution. As a result of being “established,” the parish was able to collect taxes to cover operating expenses, and it took on civic duties including providing aid to the destitute.

The vestry, which oversaw parish operations and selected the pastor, was dominated by wealthy plantation owners. The Bishop of London oversaw the church in Virginia, sending priests and missionaries despite there never being enough of either, and they reported extremely low morale among the congregation.

Fast-growing sects of dissenting Protestants, such as the Baptists and Methodists, began challenging the Anglicans’ moral leadership in the 1760s.

9. Virginia Made a Significant Contribution to the American Revolution

The Stamp Act of 1765 was one of many taxes levied by the British on the American Colonies after they won the French and Indian War.

There was a lot of talk of revolution among colonial leaders as they began speaking out against the tariffs. Patrick Henry of Virginia famously declared, “Give me liberty, or give me death!”

Virginia was one of the first states to send troops and form a militia to fight the British when the Revolutionary War broke out in 1775.

General George Washington, who commanded the Continental Army, and Thomas Jefferson, who drafted the Declaration of Independence, were both born and raised in Virginia.

10. Virginia Sided with the Confederacy During the Civil War

Many southern states broke away from the Union when Abraham Lincoln was elected president and founded the Confederate States of America.

Virginia initially intended to stay a Union state, but they were hesitant to do so because they didn’t want to start a war with other southern states. With the outbreak of hostilities at Fort Sumter in 1861, Virginia declared its independence from the United States and subsequently joined the Confederacy.

Richmond, Virginia, once in Henrico County, became the Confederacy’s new capital. Consequently, the Commonwealth of Virginia became a major theater of operations during the Civil War.

It was the site of several pivotal Civil War battles, including Spotsylvania Court House, Chancellorsville, the Second Battle of Bull Run, and Appomattox Court House.