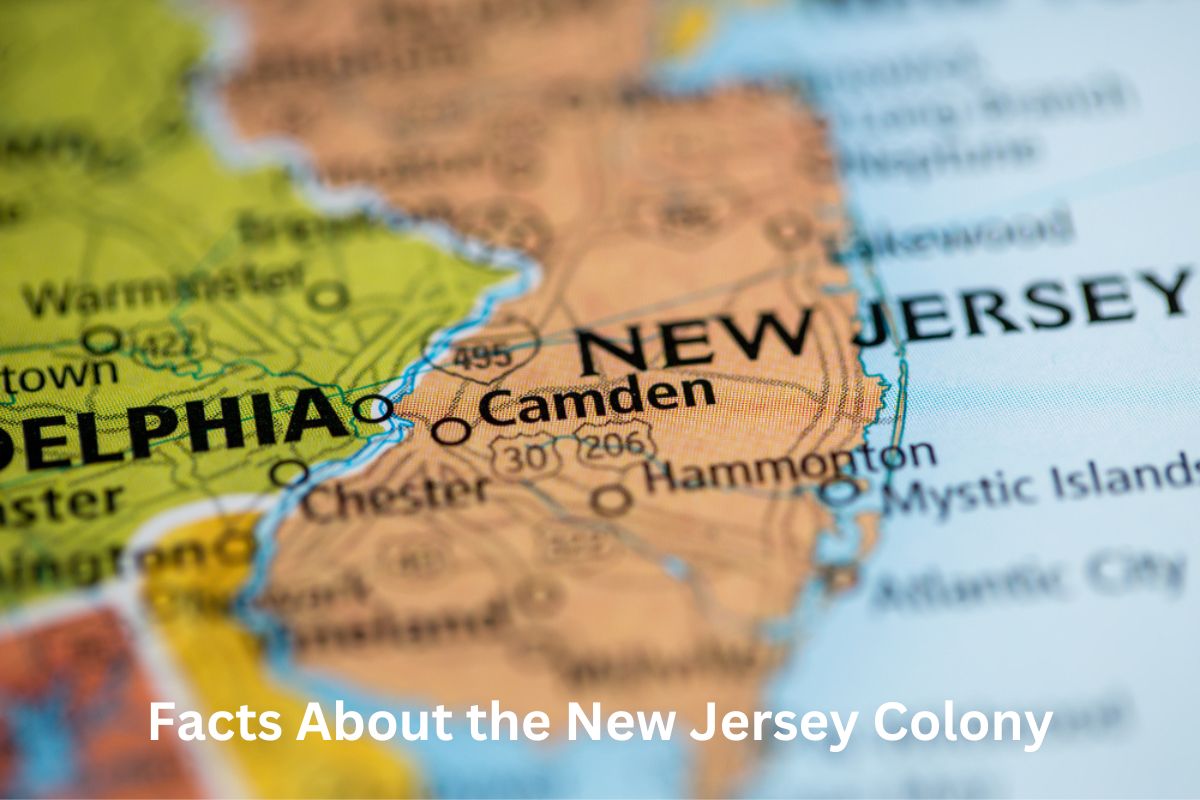 The New Jersey Colony was created in 1664 as one of the Middle Colonies of British North America. The Dutch were the first to settle in the province, establishing many modest trading posts along the Hudson and Delaware rivers.

However, the English took control of the territory in 1664 and formed the colony of New Jersey. The colony was named after the English Channel Island of Jersey, and it was separated into two sections: East Jersey and West Jersey. Perth Amboy served as the colony’s capital.

Initially, the colony was ruled as a proprietary colony, with the Carteret and Berkeley families given dominion over East and West Jersey, respectively. The two Jerseys were merged as an one royal colony in 1702.

The colony was a major agricultural area, with wheat, barley, oats, flax, and hemp being the main crops. The colony also had a sizable Quaker population and was a popular destination for religious refugees.

New Jersey was a British colony until the American Revolution in 1776, when it declared independence from Great Britain as one of thirteen colonies.

1. The Dutch were the first Europeans to make a Permanent Settlement

The founding of the New Jersey Colony may be traced back to the year 1664; at the time, it was regarded as one of the Middle Colonies located in British North America.

The Dutch were the first Europeans to make a permanent settlement in the territory that would later become the United States of America. Along the Hudson and Delaware rivers, they built a series of teeny-tiny trading ports.

In spite of this, the English were able to successfully seize control of the region in 1664 and proceed to establish the colony of New Jersey.

The colony was initially divided into two halves, known as East Jersey and West Jersey, and it got its name from the island of Jersey, which is located in the English Channel. During the time that the colony existed, the city of Perth Amboy was chosen to serve as the colony’s capital.

There was plenty of farm-able land in the New Jersey colony. Wheat and fruit trees like as apples, peaches, and blueberries formed the backbone of the colony’s agricultural economy.

Its accessibility to neighboring colonies and Europe by sea and land made the state an ideal trading partner. New Jersey’s rich soil and natural resources helped establish the state as a major economic hub in the agricultural and industrial sectors beginning in the 18th century.

Part of the territory that is now New Jersey was called New Netherlands between 1611 and 1614. In terms of European colonization, the area was initially discovered and settled by the Dutch.

Adriaen Block, Hendrick Christiansen, and Jacob van Curler, the three Dutchmen who made the initial survey, gave the area the name “Netherlands” in honor of their homeland. New Amsterdam, the Dutch name for their trading center on the Hudson River, is now known as New York City.

On the western side of the Hudson River, the Dutch West India Company set up a colony where they farmed tobacco and conducted trade with the local Amerindian population.

Dutch rule lasted until 1664, when the British took over the colony and renamed it New Jersey after the island of Jersey in the English Channel.

New Jersey’s first state constitution was enacted on July 2, 1776, after the American Revolution had already begun. This occurred just a few days before the adoption of the Declaration of Independence on July 4th, 1776.

The revolutionary government of New Jersey, which had gained control of the colony following the fall of British rule, approved the state constitution.

The 1776 state constitution reflected the political and social changes occurring in the colonies at the time. It established a new system of governance for the state, as well as the people’s rights and freedoms in New Jersey.

It also abolished slavery and mandated that all children be educated. The 1776 state constitution was the first of several that New Jersey adopted throughout the years, with the current state constitution being established in 1947.

It is worth noting that New Jersey was the first state to adopt the Bill of Rights on December 18, 1787, which is the first ten articles to the United States Constitution that guarantee people’ individual rights and liberties.

New Jersey was the location of over 100 conflicts during the American Revolutionary War, making it one of the most heavily contested areas of the war. The colony’s strategic importance for both the British and the Patriots stemmed from its placement between New York City and Philadelphia.

Because of its strategic location, New Jersey was dubbed the “Crossroads of the Revolution.” The Battle of Trenton, the Battle of Princeton, and the Battle of Monmouth are among the most significant engagements fought in the state.

The Battle of Trenton, fought on December 26, 1776, was a major victory for the Patriots and aided in raising the morale of the Continental Army.

The Battle of Princeton, fought on January 3, 1777, was another key success for the Patriots, and it contributed to the Patriots gaining control of the colony.

The Battle of Monmouth, fought on June 28, 1778, was one of the war’s major confrontations, ending in a tactical draw but a strategic success for the Patriots.

Because of the enormous number of conflicts fought in the state, New Jersey has many historical sites and monuments commemorating the Revolutionary War.

6. It Was the Third U.S. State of the Original Thirteen Colonies

New Jersey was essential in the founding of the United States because of its placement between New York City and Philadelphia during the Revolutionary War.

The ratification of the Constitution by New Jersey was the product of a protracted and difficult debate, with many residents divided over the subject of state sovereignty and federal government power.

However, the state’s officials ultimately decided to ratify the Constitution, recognizing the benefits to the state and the nation as a whole.

7. There Was a Border Dispute With New York

The New York-New Jersey Line War, often known as the “Yellow War,” was a series of battles and raids that took place between 1701 and 1765 at the disputed border between the two American colonies, the Provinces of New York and New Jersey.

The war began from a disagreement over the two colonies’ border, which was not properly delineated in the original land concessions.

The fight began with small-scale raids and skirmishes between residents from the two colonies, but it quickly escalated, with both sides launching large-scale attacks and reinforcing their towns.

Local militias and vigilantes frequently took the lead in the combat due to a lack of structure and cooperation on both sides. The war was not formally proclaimed, and no major battles were fought, but it caused enormous damage to communities and farmland on both sides of the border, as well as the loss of lives.

In 1765, the British government established the “New York-New Jersey Boundary Line,” which delineated the border between the two provinces. A surveying crew surveyed and marked the line, which was recognized by both colonies.

Queen’s College, today known as Rutgers University, was truly the colony of New Jersey’s first college. It was the eight institution of higher learning to be created in the colonies, founded in 1766 by the Dutch Reformed Church.

The institution was founded in New Brunswick, New Jersey, to give instruction in the arts and sciences, as well as to train students for ministry.

In 1825, Queen’s College was renamed Rutgers College in honor of Colonel Henry Rutgers, a Revolutionary War hero who generously donated to the college. Rutgers College and the adjacent College of Agriculture and Mechanic Arts united in 1864 to form Rutgers University, the State University of New Jersey.

Rutgers University is one of the oldest and most prestigious institutions of higher learning in the United States, with excellent programs in the arts and sciences, as well as business, law, and engineering.

9. The Supreme Court was Created in the Province of New Jersey

The Supreme Court was created in the province of New Jersey in 1704 to meet alternately in Perth Amboy and Burlington.

The British government founded the court to provide a system of justice for the colony, and it was composed of a chief justice, a second judge, and numerous associate justices. The court heard criminal and civil cases and had the authority to issue writs, warrants, and other legal documents.

The Supreme Court of New Jersey played an important role in the administration of justice in the colony and in establishing the rule of law.

The court also aided in the resolution of disputes between settlers and the government, and it was crucial in the establishment of the colony’s legal system. The court system was modeled after the English justice system and was founded on common law ideas.

10. Iron Ore was One of it’s Most Important Resources

Iron ore was a valuable resource for the New Jersey colony. The colony’s iron mining business was considerable, and it was noted for its high-quality iron ore. The iron ore reserves were found in the state’s northwestern region, in an area known as the “Iron Hills.”

The Iron Hills’ iron ore was regarded as some of the best in the colonies, and it was in high demand for the manufacture of iron items such as tools, weapons, and building materials.

The iron mining industry in New Jersey was vital to the colony’s economy, providing employment and revenue to many of the inhabitants.

Individuals and companies ran the iron mines, and the iron ore was carried to neighboring ironworks to be smelted and processed into iron products. The ironworks were also vital to the colony’s economy, providing employment and cash for many of the inhabitants.

New Jersey’s iron mining sector was also crucial to the American Revolution. The iron mines provided raw materials for the manufacture of weapons and ammunition, which the Patriots required during the fight.

The iron mines and ironworks in New Jersey also contributed to the Patriots’ ability to manufacture guns and ammunition, which they required during the war.